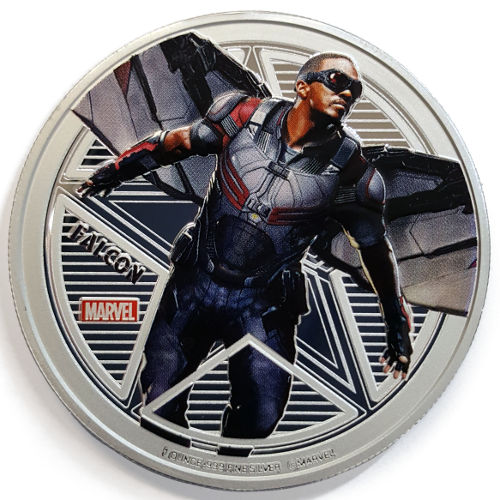 In the film Captain America: Civil War, the squad of Avengers are challenged by internal strife that threatens to divide the group of superheroes forever. After recent events involving the Avengers put the public at risk, the government pushes for greater accountability and oversight of the group.

Iron Man, surprisingly, sides with government intervention in the matter, while Captain America wants the group to maintain its autonomy. The rest of the Avengers are forced to choose signs in a coming epic battle to see whose will wins out between Tony Stark and Steve Rogers. Silver Falcon finds himself on the side of greater autonomy, on Team Cap.

The obverse of the 2016 1 oz Silver Proof Fiji Captain America: Civil War Silver Falcon coin has an image of Silver Falcon, direct from the feature film, in full color. Engravings include the coin’s weight, purity, and metal content, the Marvel Comics logo, and the name of Silver Falcon.

On the reverse face of the coin is the image of the Fijian crest, which includes multiple representations of the island nation’s seafaring history. Engravings include the nation of issue, year of issue, and face value of the coin.

There are a total of six coins in the 2016 Captain America: Civil War proof silver series, and each is produced by the Sunshine Mint. The mint is a privately-owned company that is headquartered in Coeur d’Alene, Idaho.

If you have any questions, please don’t hesitate to ask. Silver.com associates are available on the phone at 888-989-7223, online using our live web chat, and via our email address.