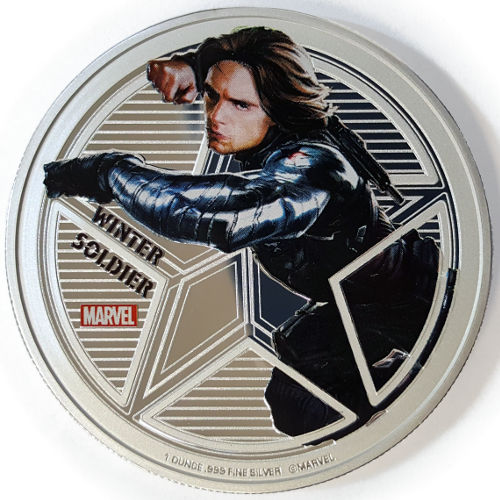 With Captain America: Civil War breaking box-office records, it was only a matter of time before the superheroes graced the surface of precious metal collectible coins. The Sunshine Mint follows the lead of other mints in releasing a celebratory set of superhero-themed coins. Today, you can purchase the 2016 1 oz Silver Proof Fiji Captain America: Civil War Winter Soldier Coin on Silver.com.

The Captain America: Civil War feature film continues the box-office success of Marvel Comics movies. In this latest installment, Iron Man and Captain America find themselves at odds over government oversight of the Avengers.

While Captain America believes the group should continue to protect humanity without government interference, Iron Man surprisingly sides with the government in favor of accountability and oversight for the Avengers. The resulting rift creates a divide in the Avengers, forcing a Civil War between the heroes.

On the obverse of each coin in the series is a colorized image of one superhero. For the 2016 1 oz Silver Proof Fiji Captain America: Civil War Winter Soldier Coin that design features the Winter Soldier, a former ally of Steve Rogers who was lost behind enemy lines during the war and recruited by the Soviet Union.

The reverse of the coin bears the official crest of the nation of Fiji, along with engravings identifying the year of issue, nation of issue, and face value of each coin. All coins in this six-coin set ship in collectible tins with theatrical artwork from the feature film Captain America: Civil War.

Sunshine Mint is a privately-owned and operated minting company located in the state of Idaho. Its headquarters is located in Coeur d’Alene, while additional facilities exist in Las Vegas, Nevada and Shanghai, China.

If you have any questions about these exciting new coins, please don’t hesitate to ask a Silver.com associate. We’re available on the phone at 888-989-7223, online using our live chat, and via our email address.