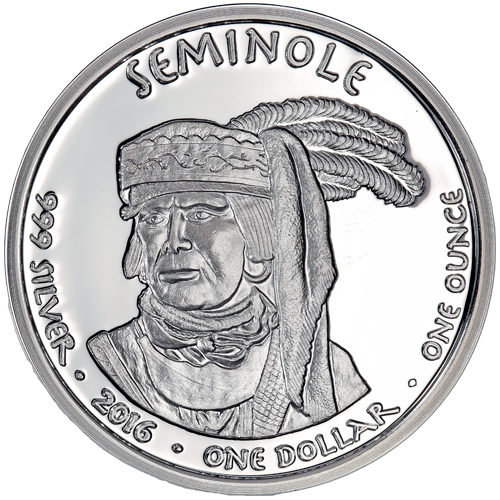 The Native American Mint’s expansive Proof Silver Dollar coin program representing the various states and tribes of the United States continues with the exciting new release of a Florida Seminole coin. In keeping with the design features of previous releases, these coins feature unique images representing the Seminole tribal nation and the most prominent native species of the state; the American alligator. Today, Silver.com offers the 2016 1 oz Proof Silver Florida Seminole Alligator coin for purchase online.

In this release for the Native American Silver Dollar Series, the Native American Mint highlights one of the most unique tribes in the United States. Today, the vast majority of Seminole tribal members live in Oklahoma, but the ancestral home of the tribe lies in Florida. Masters of the swampy backwaters, the Seminoles were forced out of the region during the infamous Trail of Tears march that saw many southeastern tribes resettled in Oklahoma.

Highlighting the uniqueness of Florida, the 2016 1 oz Proof Silver Florida Seminole Alligator coin features images of the state’s original tribal occupants. The American alligator, a deadly occupant of the Everglades and other parts of the state is also featured in this coin design.

The obverse side of the coin features the image of a Seminole tribal member, along with engravings that identify the tribal nation, the coin’s face value, and the year of issue from the Native American Mint.

On the reverse of the 2016 1 oz Proof Silver Florida Seminole Alligator coin is the image of an alligator. The American alligator is considered an animal of least concern by conservation agencies. A male alligator can grow to a length of 11 to 15 feet on average and weigh as much as 1,000 lbs.

The Native American Mint strikes these coins with a face value, but it is critical to note that these coins have no legal tender status under the Constitution of the United States of America. Only the federal government and US Mint have the power to issue official legal tender currency in the US.

Please direct your questions to a Silver.com associate at 888-989-7223, connect with us online using our live chat, or send us an email. Be sure to check out our full selection of Native American Silver Coins.