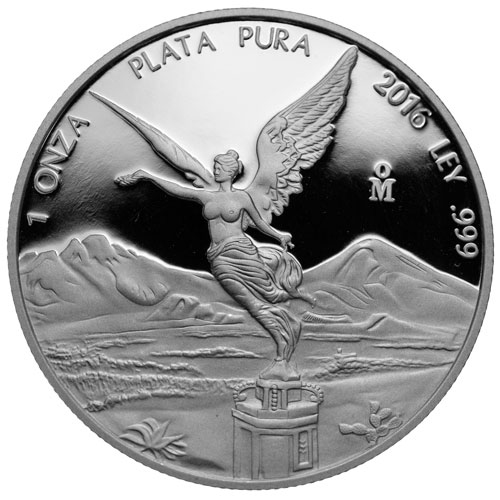 Proof Silver Mexican Libertad coins debuted in 1983 with only the 1 oz Proof Silver Libertad available, but in an extremely limited mintage of less than 1,000 coins. Regular production of the coins has occurred annually since 1986.

Although the Proof Silver Libertady is often overshadowed by North American counterparts, it is in fact in equal demand because of its extremely low mintage figures. The highest single year of production was the 1986 debut, which had 30,006 coins. Contrast that to the all-time high for the Silver American Eagle proof, which has surpassed 1.45 million coins in one year on two occasions.

The obverse face of all 2016 1 oz Proof Silver Mexican Libertad coins features numerous images from Mexican history. In the background you’ll notice two mountain peaks. Each one is a volcanic peak named after a pair of ancient Aztec lovers with a story not too different from that of Romeo and Juliet.

On the reverse side of the 1 oz Proof Silver Libertad you’ll find the modern coat of arms of Mexico in the center. Unlike the fractional-weight coins, these 1 oz Proofs have a circle surrounding them containing all 10 historic versions of the coat of arms dating back to the original from 1820.

The Mexican Mint is located in Mexico City, Mexico. It is the oldest operating mint in the Western Hemisphere, having opened in 1535 under Spanish rule. Originally it struck coins for the Spanish Empire and its colonies throughout the Western world, from the Pacific Ocean to South America.

If you have any questions about these Proof Silver Mexican Libertad coins, please don’t hesitate to ask. Silver.com customer service associates are available at 888-989-7223, online through our live web chat, or via our email address.