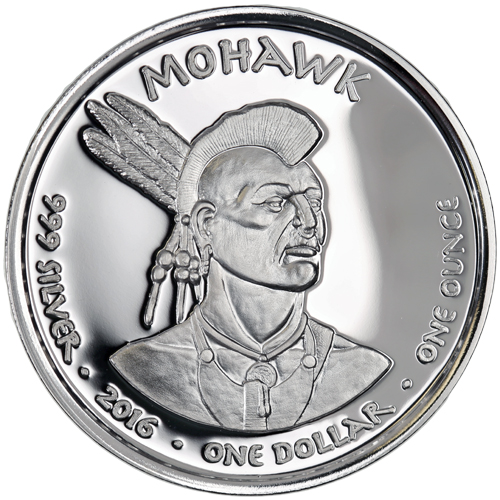 The Mohawk tribe is one of the most well-known in the United States. The warriors are known as some of the most impressive, and historically, they are known for protecting other members of the Iroquois Confederation against aggression other Native American and First Nation tribes in North America. Currently, this tribe is being honored with the 2016 1 oz Proof Silver New York Mohawk Raccoon Coin, which is available at Silver.com.

The Mohawk Valley of upstate New York has long been the home of the Mohawk people. In Iroquois, the name Mohawk means “people of the Flint place,” which makes sense because the area was rich in flint. This flint was traded with other tribes and help the Mohawk people to become a powerful tribe in the Iroquois Confederation.

The Mohican warriors are known to be some of the fiercest warriors around. They were offered called the Guardians of the Eastern Door, as they were the protectors of other members of the Confederation against the aggressions of tribes in New England and Eastern Canada along the Atlantic Coast.

On the obverse of each of these coins, you will see one of these warriors, as well as the face value, weight, purity and metal content of the coin.

The reverse of each 2016 1 oz Proof Silver New York Mohawk Raccoon Coin features the raccoon. These animals were once commonly hunted for their pelts. Now, most Americans view them as pasts that like to scavenge through garbage cans.