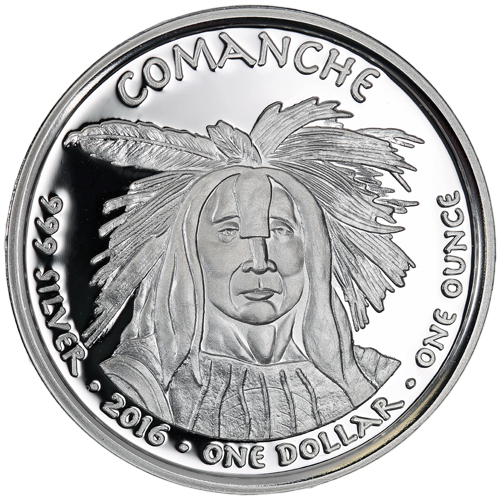 The Native American Mint’s Native American Silver Dollar Coin Series seeks to honor the various tribes located in North America. The series, which started in 2015, will feature tribes from the United States and Canada. Now, you can get the 2016 1 oz Proof Silver Texas Comanche Longhorn Coins from Silver.com.

While the coins in the Native American Silver Dollar series aren’t considered legal tender to the US government, they do carry a face value in the issuing tribes. The 2016 1 oz Proof Silver Texas Comanche Longhorn Coins have a $1 face value that is backed by the Comanche tribe.

This is the fourth coin to be released in 2016, but the ninth overall. Each of the coins in the series are proof coins that feature a satin finish.

On the obverse of each 2016 1 oz Proof Silver Texas Comanche Longhorn Coin, you will see an image of a Comanche warrior with his headdress. On this side of the coin, you can also see the coin’s purity, metal content, weight and face value.

The reverse of each coin bears the image of the Longhorn. These cattle are native to the region and have been a symbol of Texas for decades.

These coins were created by the Native American Mint. The Native American Mint isn’t associated with the federal government or the United States Mint, and these coins are not legal tender recognized by the United States government. These coins are made under the authority of the issuing tribe, which for these particular ones is the Comanche tribe. The coins only have a face value to the Comanche tribe.

If you have any questions, please don’t hesitate to contact Silver.com. Our associates are available at 888-989-7223, online using our live web chat, or via our email address.