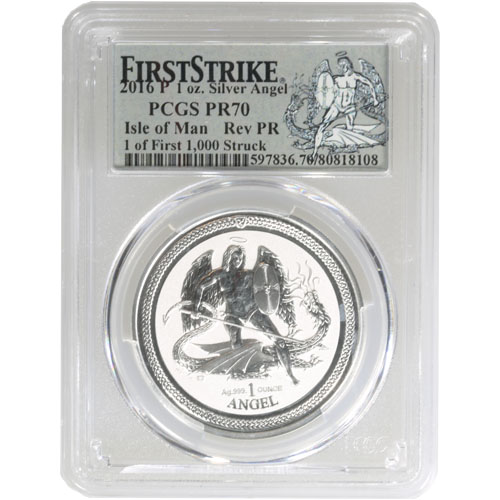 The Pobjoy Mint’s Isle of Man Angel Coins feature designs inspired by the Gold Angel bullion coin introduced during the reign of King Edward IV in the 1480s. The coins feature the image of the Archangel St. Michael on one side and the reigning monarch of the United Kingdom on the other, which in the case of these coins is Queen Elizabeth II. Today, 2016 1 oz Reverse Proof Silver Isle of Man Angel Coins are available to you online at Silver.com with PCGS certification.

St. Michael was one of the leading warrior-angels fighting for the forces of good alongside God. When Satan and the fallen angels of heaven rose up to challenge God, it was St. Michael that led the forces of good in battle. He is often depicted on coinage and in works of art slaying a dragon symbolizing how he conquered evil.

All of the 2016 1 oz Reverse Proof Silver Isle of Man Angel Coins in this product listing earned perfect certifications from the PCGS. The PR70 certification is reserved for coins with full, original mint luster and a complete lack of detracting flaws. DCAM designations stand for deep-cameo and reference the beautiful visuals on the coin. These include deeply-mirrored, clear fields contrasting against strong, frosted elements.

On the obverse of 2016 Reverse Proof Silver Isle of Man Angel Coins is a depiction of Queen Elizabeth II. This right-profile portrait of the Queen is distinctive to Pobjoy Mint and features the Queen wearing one of her many tiaras from the Royal Jewels collection. This particular tiara is considered to be the Queen’s favorite and is the Girls of Great Britain and Ireland Tiara.

The reverse side of 2016 1 oz Reverse Proof Silver Isle of Man Angel Coins includes the depiction of St. Michael as he slays a dragon. St. Michael is one of the leading archangels in Christianity. An archangel is an angel of higher rank.

Please feel free to reach out to Silver.com with any questions you have about 1 oz silver. You can call us at 888-989-7223, chat with us live online, or email us directly.