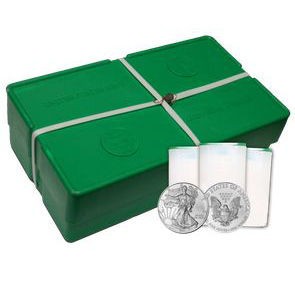 The official bullion coins of the United States of America feature not only iconic images representative of the nation and its people, but also images that have played a significant role in the coinage history of America. Right now on Silver.com, you have the chance to purchase 2016 Silver American Eagle coins in US Mint Monster Boxes.

On the obverse face of Silver American Eagle coins is the image of Walking Liberty. Introduced in 1916 on the Walking Liberty Half Dollar, Adolph A. Weinman’s creation is one of the most beloved coin designs in American history.

The reverse features a depiction of the bald eagle set behind a heraldic shield. Long used as the official emblem of the United States, the design features a bald eagle holding arrows in one talon and an olive branch in the other. The 13 stars over its head represent the nation’s original colonies, and the coin’s weight, face value, and metal content are included on this side.

Please contact Silver.com with any questions you have about these Monster Boxes. We’re available on the phone at 888-989-7223, online using our live chat, or via email.