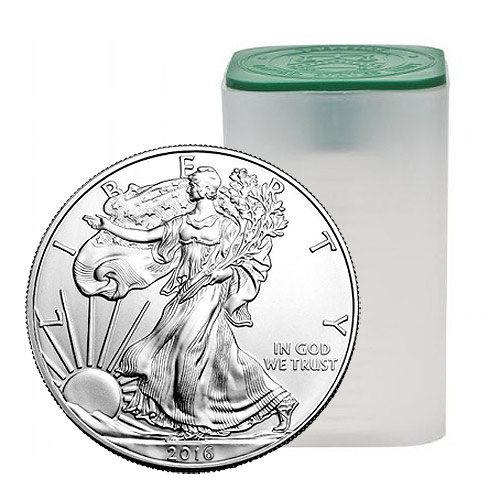 The single most popular coin in the world celebrates thirty years of production in 2016, and now is your chance to make a bulk purchase of these stunning coins. The United States Mint’s Silver American Eagle program set a sales record in 2014, with 44 million coins sold. The 2016 Silver American Eagle is now available for purchase on Silver.com in mint-sealed tubes of 20.

The Liberty Coin Act of 1985 authorized the production of an official silver bullion coin for the United States. Conceived as a bullion program, the Silver American Eagle was at first introduced in both bullion and proof strikings. A third, burnished version of the coin was introduced upon the program’s 20th anniversary in 2006.

Silver American Eagle coins feature the classic image of Lady Liberty originally found on the Walking Liberty Half Dollar, in circulation from 1916 to 1947. Adolph A. Weinman was responsible for the design, while US Mint Chief Engraver John Mercanti designed the coin’s reverse image of the heraldic eagle.

Silver.com encourages all customers to reach out to us with questions. You can contact an associate on the phone at 888-989-7223, online using our live web chat, or simply submit your questions via email.