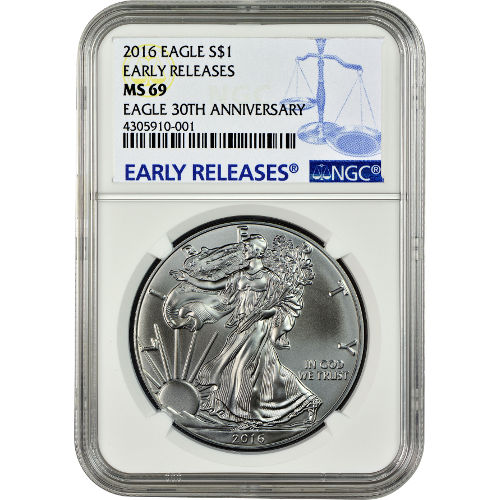 In 2016 the United States Mint celebrates 30 years of production for the beloved Silver American Eagle coin. Originally introduced in 1986, the coin program has been a must-have for serious investors and collectors every year since that date. Today, the coin is available in three versions and produced in larger numbers than ever before. Right now, the 2016 Silver American Eagle is available in near-perfect condition on Silver.com.

Silver American Eagle coins are actually part of the larger American Eagle program from the United States Mint. The series consists of silver, gold, and platinum versions of the coin, each introduced through different legislation approved by Congress.

The Silver Eagle originated in 1986 as a bullion or proof coin. While the proof coin was not struck in 2009, the bullion coin has been produced every year since its introduction in 1986. The burnished version of the coin, a special collectible version, was introduced in 2006 as the Mint celebrated the coin’s 20th anniversary.

Each of the 2016 Silver American Eagle coins offered today by Silver.com are considered near-perfect specimens by the NGC. Coins with an MS69 grade have their full, original mint luster, but also feature a maximum of two minor detracting flaws, such as miniscule contact marks or blemishes.

Part of the Early Release Series, these Silver American Eagle coins were shipped to the NGC or an NGC-approved facility in sealed mint boxes from the US Mint. In order to qualify, these coins must arrive within the first 30 days of their release by the mint.

On the obverse is the image of Walking Liberty, which was created in 1916 by Adolph A. Weinman as part of a wide-ranging redesign program by the federal government at the time. The reverse features the heraldic eagle of the United States, and was created by former US Mint Chief Engraver John Mercanti.

Please direct any questions to a Silver.com associate. You can reach one of our team members at 888-989-7223, online using our live chat, or via email.