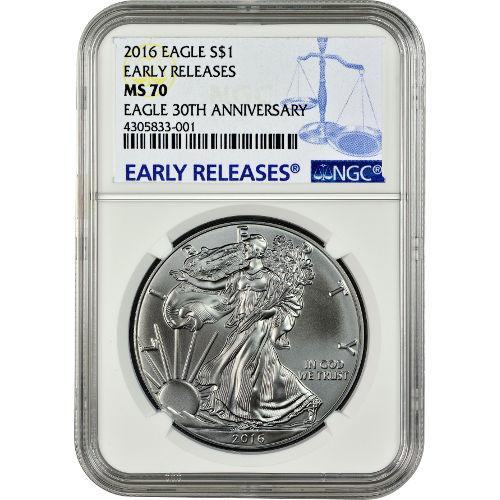 All 2016 Silver American Eagle coins in this Silver.com product listing are Mint State 70 coins, which the NGC considers to be perfect specimens. Coins in this condition have full, original luster and no detracting flaws or blemishes of any kind.

In order to receive the Early Release designation, coins must arrive at the NGC depository or an approved facility in sealed US Mint boxes within the first 30 days of the release date from the United States Mint.

Adolph A. Weinman’s Walking Liberty design is the primary image used on the Silver American Eagle coin. Created in 1916, the image features Lady Liberty in full-length figure with the American flag draped over her shoulders. Weinman’s depiction is meant to symbolize the nation’s constant march toward a brighter future.

On the obverse of all Silver American Eagle coins you’ll find this image of Walking Liberty. Weinman’s creation originally appeared on the nation’s half-dollar coin from 1916 to 1947. The reverse side of the coin features the heraldic eagle creation from John Mercanti.

Mercanti was the Chief Engraver of the United States Mint from 1986 to 2010. His first major design for the mint was the heraldic eagle for the Silver American Eagle, and since his retirement in 2010, the post of Chief Engraver has remained vacant. 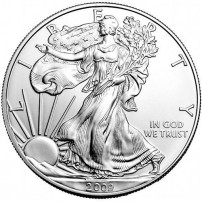