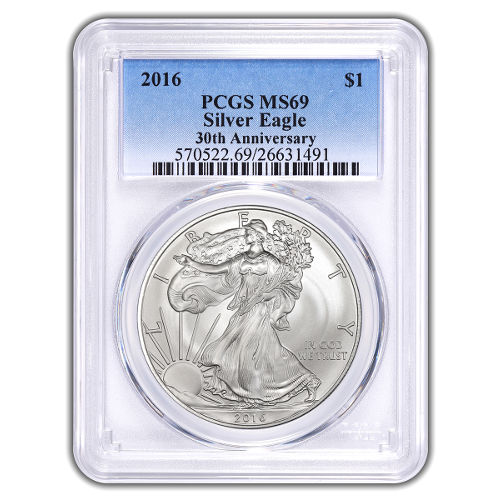 In 1985, Congress passed the Liberty Coin Act of 1985, authorizing the Treasury Department and United States Mint to use silver stores from the Defense National Stockpile to strike an official silver bullion coin for the United States government.

When the Silver American Eagle debuted in 1986, it was available as a 1 oz. coin in both bullion and proof versions. To date, the bullion coin has been struck every year since, while the proof coin has been struck every year except 2009. A burnished version of the coin was added in 2006 as the US Mint celebrated the 20th anniversary of the coin program.

Each 2016 Silver American Eagle available to you from Silver.com right now has a near-perfect grade from the PCGS. Coins with an MS69 grade have their full, original mint luster, but may also contain a maximum of two minor detracting flaws on the surface.

The image of Walking Liberty, created in 1916 by Adolph A. Weinman, graces the obverse of the Silver American Eagle. Weinman was one of a handful of artists and sculptors chosen by the government in the early 20th century to help redesign all American coinage. His Walking Liberty design featured on the Walking Liberty Half Dollar from 1916 to 1947.

On the reverse is the image of a heraldic eagle from John Mercanti. The former Chief Engraver of the United States Mint, Mercanti’s depiction features a bald eagle behind the heraldic shield of the US, with arrows and an olive branch in its talons.