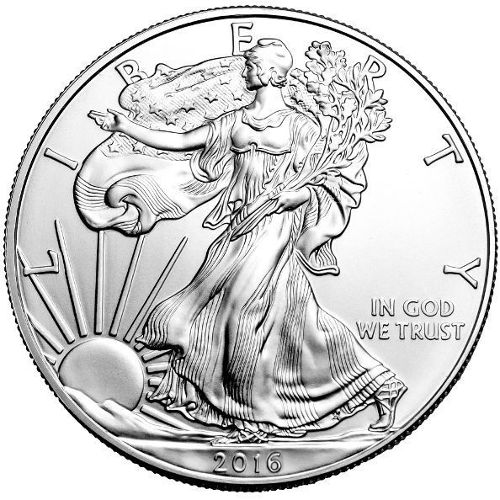 Any quantity available for $12.99 per oz over spot!

Silver American Eagle coins are the official silver bullion coin of the United States, and feature the historic Walking Liberty design from Adolph A. Weinman. Born as Adolph Alexander Weinman in Germany, Weinman grew up in the United States to become a famous sculptor and architect.

He was chosen by new US Mint Director Robert W. Woolley in 1915 to redesign the nation’s 50-cent silver piece to replace the designs from Charles E. Barber, which had been in use since 1892. Though Weinman was one of many artists chosen at the time to help redesign silver currency, his Walking Liberty Half Dollar design stands the test of time as one of the most iconic from the era.

On the obverse face of all Silver American Eagle coins is Weinman’s Walking Liberty. She is so-named because she is featured walking from right to left on the coin, with her right hand outstretched and her shoulders draped in the American flag as she marches toward the setting sun. This image originally appeared on the Walking Liberty Half Dollar from 1916 to 1947.

The reverse features the heraldic eagle design from US Mint Chief Engraver John Mercanti. His creation features a bald eagle set behind a shield, with arrows in one talon and an olive branch in the other, while 13 stars above its head represent the original colonies in America.

Silver American Eagle coins have been produced over the last 30 years by the Philadelphia Mint, San Francisco Mint, and the West Point Mint.

If you have questions, please feel free to contact Silver.com at 888-989-7223. We’re also available online using our live web chat and email services. If you are interested in similar products, be sure to check out our selection of Proof Silver Coins.