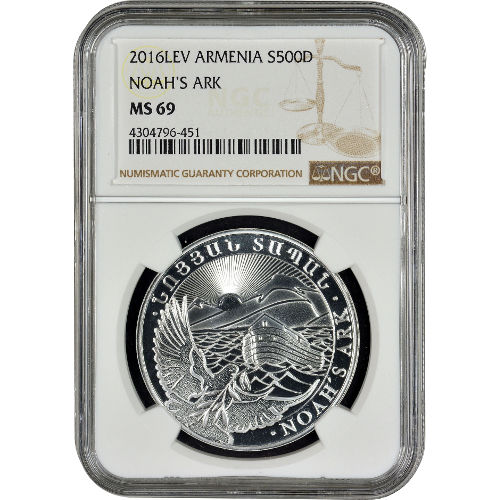 Any quantity available for $15.99 per coin over spot!

Silver Noah’s Ark coins were introduced by the Armenian government in 2011. The coins are available in weights ranging from ¼ oz up to 5 Kilograms, and have face values listed in the national Dram currency.

Each of the 2016 Silver Armenian Noah’s Ark coins in this product listing has a grade of MS69 from the NGC. Coins in this condition are considered near perfect, which means you’ll see the original mint luster on the coins, but also a maximum of two minor detracting flaws on the surface.

From the book of Genesis, the story of Noah’s Ark is one of sin and cleansing. God sends a flood to wipe the Earth clean of mankind’s sin, sparing only Noah, his family, and the animal species of the world from the destruction. Armenia was the first modern nation to adopt Christianity as an official state religion, and is the historic home of Mount Ararat.

On the reverse face of the coin is the image of Noah’s Ark resting on the flood waters. The sun is visible peeking over the top of Mount Ararat in the background, while a dove bearing an olive branch flies into the foreground.

The obverse bears the coat of arms for the nation of Armenia, as well as an engraving of the face value in Drams. All engravings on the obverse and reverse are listed in both English and Armenian.

If you have any questions, please feel free to contact Silver.com at 888-989-7223. You can also connect with us online using our live web chat and email features.