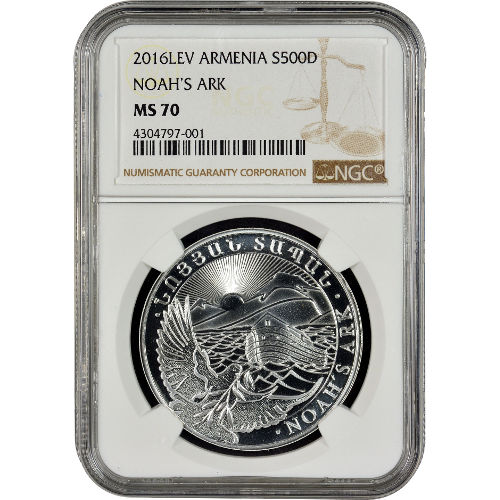 Like so many other bullion coins in the world, the Silver Armenian Noah’s Ark coin is an official bullion coin for the nation it represents and features the same motif from one year to the next. First issued in 2011, the coin is celebrating its 5th anniversary in 2016, and its popularity is higher than ever before. Today, the 2016 1 oz Silver Armenian Noah’s Ark coin is available in perfect condition on Silver.com.

Silver Armenian Noah’s Ark coins bear the image of the biblical tale because of the nation’s close association with this story from the book of Genesis in the Christian bible. In the tale of Noah, he is chosen by God to build and ark that will save his family and the animal species of the world from a devastating flood.

Armenia was the first modern republic to adopt Christianity as an official state religion. More importantly, Mount Ararat, the resting place of the ark in Genesis, was once located within the nation’s boundaries. Only political forces following World War I could take the mountain from Armenia, as borders were redrawn and the mountain now rests in Turkey.

Each of the Silver Armenian Noah’s Ark coins in this listing has a perfect grade from the NGC. Coins in MS70 condition exhibit full, original mint luster and lack any blemishes, contact marks, spotted surfaces, breaks in the luster, hairlines, or other detracting flaws.

On the reverse is the imagery of Noah’s Ark as it rests upon the flood waters. The obverse side bears the coat of arms for Armenia. All engravings, both on the obverse and reverse, are in Armenian and English.

These coins may be the official silver bullion product of Armenia, but they are minted in Germany at the highly regarded Geiger Edelmetalle facility. The coins are only legal tender in Armenia.

Please direct all of your questions to a Silver.com associate at 888-989-7223, chat with us live online, or email us.