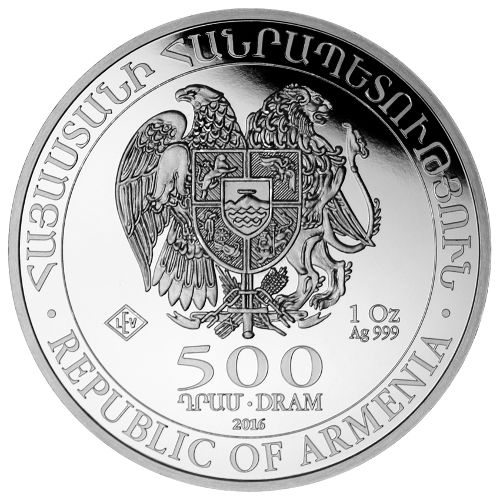 The Book of Genesis in the Christian bible tells the tale of God’s disastrous flood that annihilates mankind. Punishment for sins, the flood wipes the Earth of mankind’s transgressions, saving one man, his family, and the animal species of the world. This epic story is captured brilliantly on the sovereign coin of Armenia, the Silver Armenian Noah’s Ark. Right now, the 2016 1 oz Silver Armenian Noah’s Ark coin is available on Silver.com.

Silver Armenian Noah’s Ark coins were first introduced in 2011 by Geiger Edelmetalle. Unlike other coin programs struck outside the nation of issue, these coins are officially sanctioned by the Armenian government and hold status as legal tender coins in the nation. As Armenia is not a member of the Eurozone, the coins have a face value listed in Armenian Drams.

The first coins in the series were available in weights including 1 oz, ½ oz, and ¼ oz. Recent years have seen the program expanded to include 5 oz, 10 oz, 1 Kilo, and 5 Kilo coins. In total, some 2 million coins have been produced across all weights during its five-year production cycle.

On the obverse side of each coin is the coat of arms for the Republic of Armenia. The nation’s official name of “Republic of Armenia” is engraved on this side in both Armenian and English, along with inscriptions of the weight, fineness, and metal content of the coin.

The reverse of each 2016 1 oz Silver Armenian Noah’s Ark bears a depiction of the flood scene from Genesis. In the image, Noah’s Ark can be seen floating on the flood waters in the middle ground. The background is dominated by the peak of Mount Ararat, behind which the sun can be seen starting to rise into the sky. In the foreground, a dove enters the picture holding an olive branch.

If you have any questions about these brilliant coins, don’t hesitate to ask a Silver.com associate. You can reach us on the phone at 888-989-7223, connect with us online using our live chat, or send us an email. If you are interested in similar products, be sure to check out our full selection of Silver Armenian Coins.