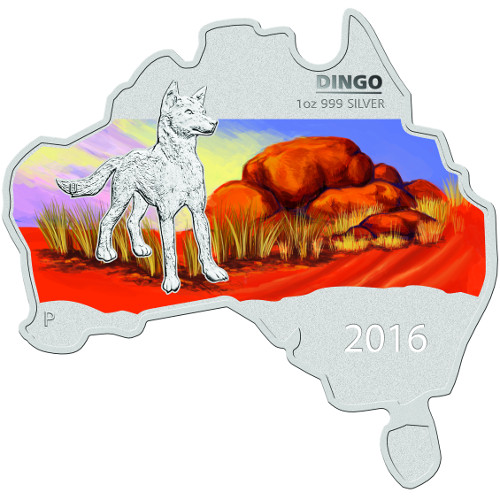 One of the most exciting coin releases from the Perth Mint during the 2010s has been the Australian Map-Shaped Series. Each blank in this series is shaped like the marvelous continent itself, and bears colorized imagery on the reverse side depicting some of the continent’s most well-known natural residents. Right now, the 2016 1 oz Silver Australian Dingo Coin is available to purchase online at Silver.com.

The dingo is an incredibly popular animal in world culture, not just that of Australia. It was popularized around the globe in the 1980s when a family in Australia claimed their young child was dragged off and viciously killed by one of these wild dogs. The dingo is said to have come to the Australian continent more than 5,000 years ago and descended from semi-domesticated dogs in East or South Asia.

Each coin in the Australian Map-Shaped release from the Perth Mint bears a colorized reverse design on a blank shaped like the Australian continent, the sixth largest land mass in the world. The series includes two annual releases and was launched in 2012 with the Kookaburra and Emu designs, and has subsequently featured the kangaroo, platypus, koala, saltwater crocodile, wedge-tailed eagle, redback spider, and great white shark (in order, to date).

On the reverse of the 2016 1 oz Silver Australian Dingo Coin you’ll find the image of an alert dingo as it looks out over the vast expanses of the Outback’s desert regions. The background images feature rich hues of red, orange, and yellow to bring the Outback to life, with soft blue, purple, and white tones in the background sky.

The obverse of each coin in the collection includes the right-profile portrait of Queen Elizabeth II from Ian Rank-Broadley. Created in 1998, it is the fourth-generation depiction of the Queen since she ascended to the throne in 1952.

All 2016 1 oz Silver Australian Dingo Coins ship to you inside of the Perth Mint’s classic black display box, and arrives in a full-color shipper with Dingo-themed artwork from the coin’s reverse. An individually numbered Certificate of Authenticity is also included.