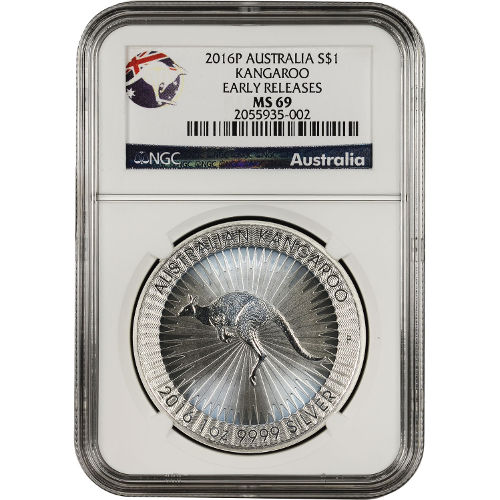 The Perth Mint has a history of producing silver bullion coins that are highly sought after by investors and collectors. Its popular Kookaburra and Koala coin series launched a trend of bullion coins with new designs on the reverse each year. Now the 2016 Silver Australian Kangaroo coin enters the fray, and brings some new aspects to Perth Mint designs. Right now, Silver.com offers the 2016 1 oz Silver Australian Kangaroo Coin in near-perfect condition.

Each Silver Australian Kangaroo offered by Silver.com in this product listing has a Mint State 69 grade from the NGC. A coin is considered near perfect when it has its full, original luster, but also as many as two minor flaws in its appearance. As part of the Perth Mint’s Early Release edition, these coins arrived at an NGC depository or other approved facility within the first 30 days of issue.

On the reverse side is the all-new Silver Australian Kangaroo design, the first in the series. The obverse bears the right-profile portrait of Queen Elizabeth II as featured on all Perth Mint silver and gold coins.

Perth Mint was established in 1898 as the final of three British Royal Mint facilities in Australia. Today it is a state-owned entity of Western Australia and operates separate of the Royal Australian Mint.

If you have questions, please contact Silver.com at 888-989-7223, chat with us online, or submit your questions in an email.