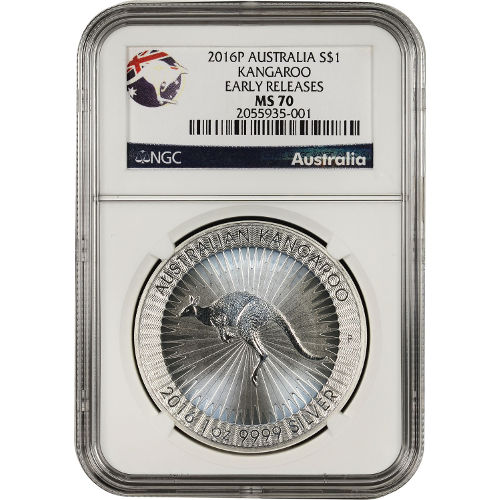 Australia’s Perth Mint has released its first new silver bullion coin program in almost a decade. The all-new Silver Australian Kangaroo builds upon the tradition and success of the Kookaburra and Koala coins, offering its own unique designs and an impressive step up compared to its predecessors. Silver.com now proudly offers the 2016 1 oz Silver Australian Kangaroo Coin in perfect condition.

Silver Australian Kangaroo coins are only available in a 1 oz weight during this first year of production. This particular coin is part of a larger, new bullion coin series from the Perth Mint that includes a gold version in several weights in addition to this silver product.

While the new Silver Australian Kangaroo coin is similar to the concept of the Australian Kookaburra and Koala coins in that it celebrates a native species and features a new design annually, it is also different. Its predecessors feature .999 fine silver, while this is the first coin from the Perth Mint with .9999 fine silver.

Each 2016 Silver Australian Kangaroo coin in this Silver.com product listing earned a Mint State 70 grade from the NGC. Considered a perfect coin, it has its full, original luster and no detracting flaws of any kind on its surfaces. The Early Released label identifies coins that arrived at NGC depositories or other approved facilities within the first 30 days of issue.

On the reverse side is the image of a leaping kangaroo, surrounded by engravings that include “Australian Kangaroo” and the coin’s weight, metal content, and purity. The obverse bears Ian Rank-Broadley’s right-profile portrait of Queen Elizabeth II, along with engravings of her name, the nation of issue, and the face value of the coin.

Perth Mint is located in Perth, in the state of Western Australia. The mint is owned by the state government and operates separately of the Royal Australian Mint.

If you have any questions, Silver.com associates are available at 888-989-7223. You can also reach us online through our live web chat and email services.