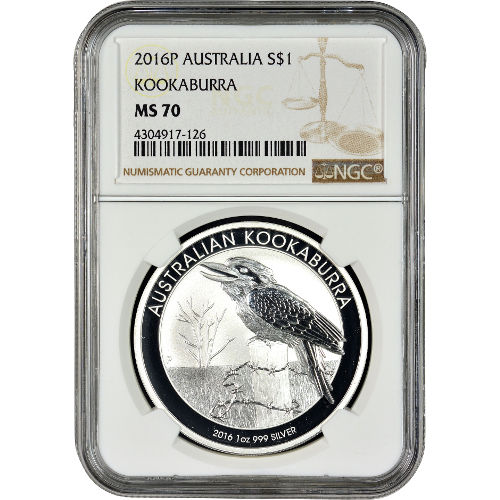 Silver Australian Kookaburra coins are available in a total of three weights for the 2016 issue year. The popular 1 oz weight is available with a maximum mintage of 500,000 coins for global distribution, while the 10 oz and 1 Kilo coins have an unlimited mintage level and will be struck to match demand.

The 2016 Silver Australian Kookaburra coins available right now are perfect specimens in the eyes of the NGC. Coins with an MS70 grade have full, original luster from the mint and feature no blemishes, contact marks, hairlines, or other detracting flaws.

On the reverse face of the coin you’ll find a solitary kookaburra perched atop a fence post in the Australian Outback. This is the 26th different design for the Silver Kookaburra since its release in 1990.

The obverse bears the right-profile portrait of Queen Elizabeth II. Her Majesty’s portrait appears on the obverse of all British and commonwealth coins, and this particular design comes from Sir Ian Rank-Broadley, who created it in 1998.

Australia’s Perth Mint was founded in 1898 as the third and final mint in the British Royal Mint system. Following the closure of that system’s Sydney Mint and Melbourne Mint, the Perth Mint was left standing as the oldest operating facility in Australia. Though not associated with the federal government’s Royal Australian Mint system, all Perth Mint coins enjoy legal tender status under the Currency Act of 1965.

Please direct any questions you might have to a Silver.com associate. We’re available on the phone at 888-989-7223, online using our live web chat, and via email.