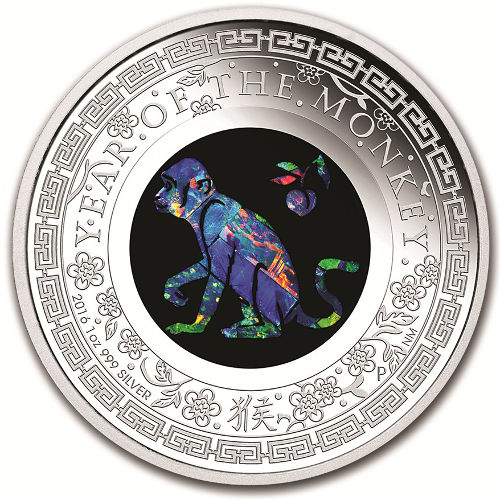 The Perth Mint is famous for the production of the world’s most popular lunar-themed coins. The spread of Chinese culture around the globe and rising prominence of the Chinese economy has led many mints and refineries to produce bullion products inspired by the Zodiac. Now, an all-new 2016 1 oz Silver Australian Monkey Opal Coin is available from the Perth Mint.

Lunar Series II coins are released annually with separate designs for the gold and silver versions of the coins. All coins in the series share a common theme for an individual year. For example, all Silver Australian Monkey coins feature a monkey and peach tree in the design, with differences between the specific design on gold and silver products.

This 2016 1 oz Silver Australian Monkey Opal coin has its own distinctive design. In the center of the reverse face is an Australian opal, which contains the left-side image of a monkey with a peach hanging behind it. The opal is surrounded by a ring of peach blossoms, continuing the monkey-peach theme.

On the obverse side of the coin is the right-profile portrait of Queen Elizabeth II. Featured on commonwealth coins from England to Australia and New Zealand since 1998, this effigy of Her Majesty was created by Ian Rank-Broadley.

If you have any questions, please don’t hesitate to ask. Silver.com associates are available on the phone at 888-989-7223. You can also reach out to us online by using our live web chat, or by submitting your questions in writing via email. 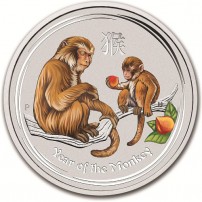