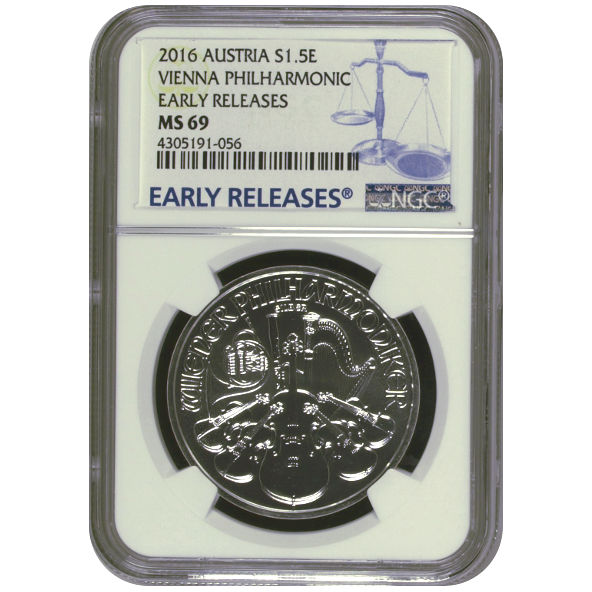 The Silver Austrian Philharmonic coin is one of the most sought-after silver bullion products in the world today. Though it features the same design year after year, investors and collectors alike appreciate the attention to detail and impressive purity of these beloved coins. The 2016 Silver Austrian Philharmonic coin is currently available on Silver.com in near-perfect condition.

Silver Austrian Philharmonic coins quickly rose to prominence following their introduction, with mintage levels increasing every year with the exception of 2012. In fact, after just four years, mintage had increased by 10 million coins from the introductory year. The original design from Pesendorfer is still used today on both gold and silver variants.

Each of these 2016 Silver Austrian Philharmonic coins in this listing has a Mint State 69 grade from the NGC. Considered near-perfect specimens, these coins have full, original luster and a maximum of two minor detracting flaws.

As Early Release coins, these Silver Austrian Philharmonic coins arrived at the NGC or an approved depository within the first 30 days of the release date set by the Austrian Mint.

The obverse side of the coin features the Musikverein concert hall and its famous pipe organ. Engravings on this side include the coin’s face value, weight, purity, and metal content, with those engravings in German.

On the reverse is a collection of musical instruments used by the members of the Vienna Philharmonic orchestra. Again, engravings on this face are in German, which is the official state language of Austria.

If you have questions, please contact Silver.com. Our associates are available at 888-989-7223, online using our live web chat feature, or via email address.