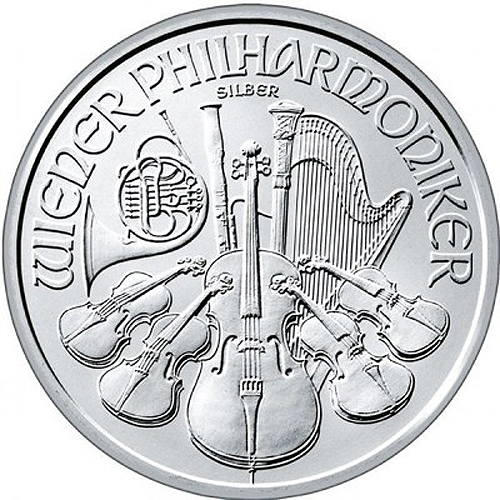 Unlike the Gold Philharmonic, Silver Austrian Philharmonic coins are only available in 1 oz weights. However, the Silver Philharmonic was an instant hit with collectors and investors. Its original mintage of 7.7 million coins in 2008 represents the lowest annual mintage level to date in the coin’s short history.

The reverse face of the coin features a cornucopia of musical instruments used by the members of the Vienna Philharmonic Orchestra. Included in the image are a harp, violin, cello, bassoon, flute, and French horn. The words “Wiener Philharmonier” and “Silber” are engraved above the design.

On the obverse is the pipe organ inside the Golden Hall at the Musikverien in the Inner Stadt neighborhood of Vienna. Once again, the engravings on this face are in German and read “Republik Osterreich” and “1 Unze Feinsilber,” as well as engravings of the year of issue and face value of the coin in Euros.

The Austrian Mint was founded in the 12th century, making it one of Europe’s oldest operating facilities. It is also one of the few facilities in the Eurozone permitted to print paper currency and coinage for the nations of the European Union.

Please feel free to contact Silver.com with your questions by calling us at 888-989-7223, chatting with us live online, or submitting your questions via email.