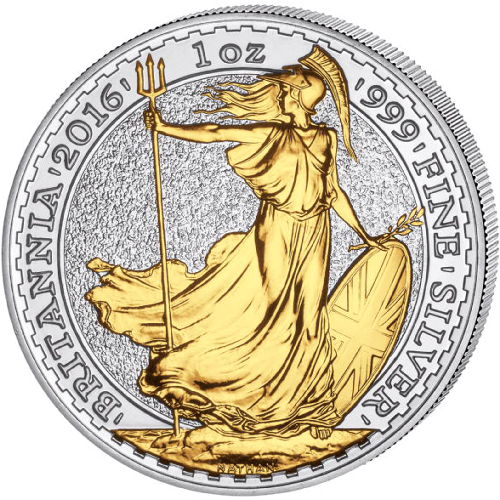 The image of Britannia has ancient roots in British culture. When the Roman Army invaded the island of Britain, Britannia was the name given to the new Roman province. Over time, Romans used the term to refer to the people of Britain as well as the province itself. Right now, the 2016 1 oz Silver British Britannia Coin is available on Silver.com with a gilded finish from the Royal Mint.

The image of Britannia first appeared on a British coin in the early 18th century when the nations of Scotland, Britain, Wales, and Ireland all formed the United Kingdom with a common currency. Britannia was the chosen image for those early coins, and reemerged in the 1980s on the Britannia bullion coin.

Each of the 2016 Silver British Britannia coins in this product listing has a stunning gilded finish. Gilded coins are standard silver bullion coins with a layer of 24-karat gold apply to one or both primary design sets. In this case, the gilded finish is featured only on the image of Britannia.

The 2016 Silver British Britannia coins in this product listing are certified as Brilliant Uncirculated products. BU coins exhibit no signs of wear and tear, though you will notice minor flaws such as breaks in the luster, spotted surfaces, and contact marks.

On the obverse face of the coin is the latest effigy of Queen Elizabeth II. The 1998 image from Ian Rank-Broadley that served as the fourth-generation image of Her Majesty has been replaced by Jody Clark’s 2015 design. At age 33, Clark is the youngest artist to create Her Majesty’s effigy for British coins.

The reverse face bears the image of Britannia, with a gilded finish. Britannia is shown wearing a Corinthian helmet, a shield with the Union Jack on it, and a trident in her right hand that signifies her control over the seas.

Please direct your questions to a Silver.com associate at 888-989-7223, online using our live web chat, and via our email address.