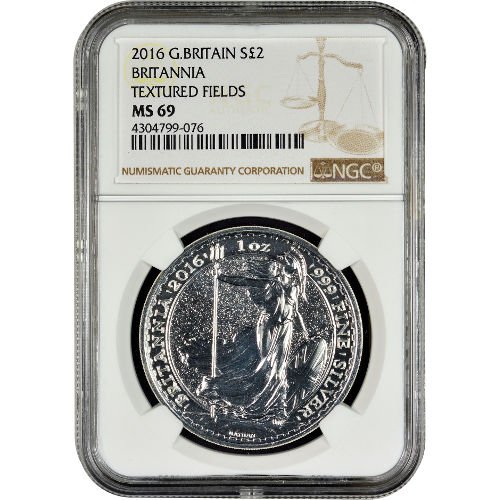 Britannia is a term that originated as a Roman and Greek geographical word used to identify the island of Great Briton. Following the Roman invasion of Britain in the 1st century AD, the region was governed as the province of Britannia. Over time the word also came to be used as an identifier for the people of Britain, as well as a goddess in charge of defending the isles from invasion. Today, Britannia appears on the Silver British Britannia coin, and a 2016 version is available on Silver.com now in near-perfect condition.

Silver British Britannia coins have a shorter history than their gold counterparts, but are no less popular among serious collectors and investors. The Britannia image first appeared on British coinage in the early 18th century, when a unified Scotland, Ireland, Wales, and England formed the United Kingdom.

The depiction of Britannia is complex, yet intricate in design. She is always featured wearing a Corinthian battle helmet on her head and holding a shield emblazoned with the Union Jack in her left hand. Her right hand holds a trident that allows her to master the seas, which is fitting given her post overlooking the English Channel that separates the island from mainland Europe and has offered natural protection for centuries.

Each of the 2016 Silver British Britannia coins in this product listing is a near-perfect specimen. These coins have an MS69 grade from the NGC, which indicates the presence of full, original luster. However, you may notice a maximum of two minor detracting flaws on the surface as well.

On the reverse of the coin is the image of Britannia, complete with engravings identifying the coin, year of issue, weight, purity, and metal content. Jody Clark’s all-new right-profile portrait of Her Majesty Queen Elizabeth II graces the obverse, and represents the first update since 1998.

Each of these coins has a brilliant textured field finish. A textured field encompasses the background field only, and gives the coin a dimpled or hammered look to its finish.