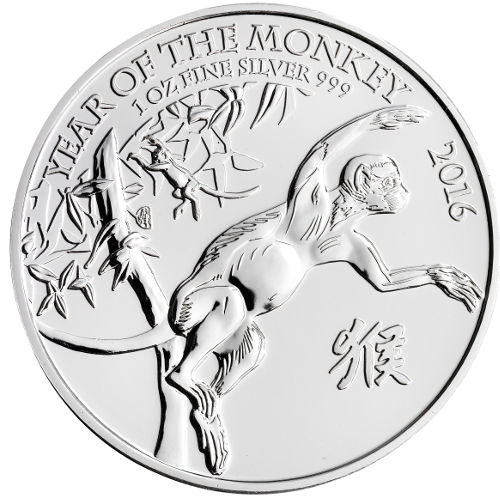 The Royal Mint of Great Britain continues with its all-new Lunar Series of coins with the release of its latest design, honoring the Year of the Monkey on the Chinese Lunar Calendar. Zodiac-inspired coins and bars are immensely popular right now, and the Royal Mint is producing some of the finest designs and coins with impressive finishes. Right now, Silver.com offers the 2016 1 oz Silver British Monkey Coin in Brilliant Uncirculated condition.

Great Britain’s Royal Mint refers to its Lunar Series of coins officially as the Shengxiao Series, using the Chinese name for the Zodiac to label its popular series of coins. The Royal Mint’s program launched in 2014 with the Year of the Horse, and enters its third production year celebrating the Year of the Monkey.

All reverse designs in the Shengxiao Series from the Royal Mint were designed by British-Chinese artist Wuon-Gean Ho, and each one is completely unique from other lunar coin series produced at other mints around the globe.

On the reverse side of the 2016 1 oz Silver British Monkey coin is the image of a pair of monkeys in a tree. In the foreground, one monkey is featured as it begins to leap from one branch to another, while the monkey in the background is hanging from a branch by its arms.

The obverse face of the coins features the first update to Queen Elizabeth II’s image since 1998. The all-new right-profile portrait of Her Majesty was created by Jody Clark, and it replaces the design from Ian Rank-Broadley that has featured on British coins for almost 20 years.

Each 2016 1 oz Silver British Monkey coin in this listing is in Brilliant Uncirculated condition. Coins with this condition show no signs of wear and tear, but may feature breaks in the luster or spotted surfaces.

If you have any questions, please don’t hesitate to contact Silver.com. Our associates are available at 888-989-7223, online using our live web chat, and via email. If you are looking for similar products, be sure to check out our selection of Silver British Coins.