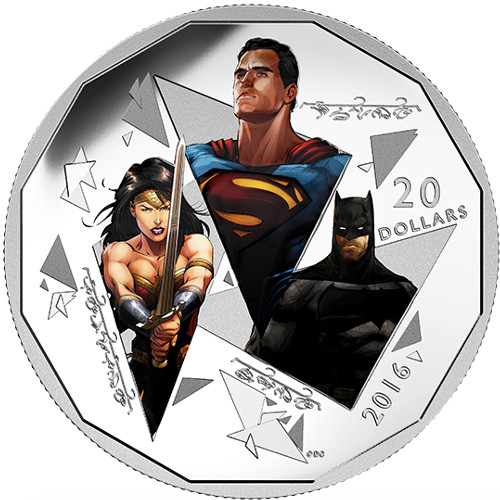 Fans of DC Comics are familiar with the popular superheroes and heroines from the franchise. Known as the Trinity, Superman, Batman, and Wonder Woman represent the ideals of justice. In the upcoming Batman v. Superman: Dawn of Justice feature film, viewers are confronted with a world torn between superheroes. Today, the 2016 1 oz Silver Canadian Batman v. Superman Dawn of Justice Trinity Coin is available for purchase on Silver.com.

Dawn of Justice introduces comic fans to a world in turmoil. Batman confronts Superman over his God-like status and the seemingly unchecked power that comes with it. Gotham City’s vigilante avenger is out for justice, and while the superheroes fight a new threat to mankind arises.

These 2016 1 oz Silver Canadian Batman v. Superman coins feature colorized images of all three members of the so-called Trinity. Superman’s image is featured at the top of the design set, with Wonder Woman to the lower left and Batman to the lower right.

On the reverse side of the coin is the image of all three members of the Dawn of Justice Trinity. Next to each superheroes image is their name, writing in the Kryptonian syllabic writing system created by Dr. Christine Schreyer, a famed Canadian linguist.

The obverse features the right-profile portrait of Queen Elizabeth II. Created in 2003 by Susanna Blunt, it is accompanied by engravings of Her Majesty’s name, the phrase “D.G. Regina,” and the nation of issue.

If you have any questions, please feel free to reach out to our customer service representatives on the phone at 888-989-7223. Silver.com associates are also available online using our live web chat and email features.