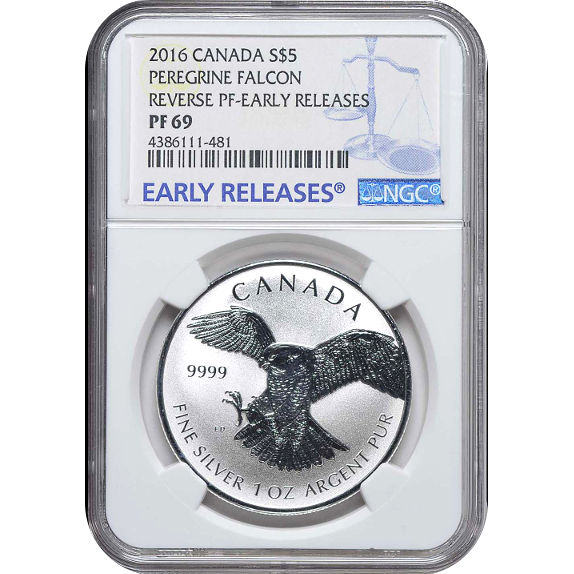 Emily Damstra designed the features of the 2016 1 oz Silver Canadian Peregrine Falcon Reverse Proof for the first time in 2014. The original Birds of Prey Series was designed entirely by Damstra, who had previously worked with the Royal Canadian Mint on the Canadian Wildlife Series, designing the final two coins in that series.

The new Birds of Prey Reverse Proof Series will launch in the same order as the original, with the Peregrine Falcon followed by the Bald Eagle, Red-tailed Hawk, and finally the Great Horned Owl. Unlike the previous series, these new coins have a reverse proof finish and a limited mintage of just 100,000 coins each, compared to one million in the original series.

On the reverse side of each coin you’ll find Damstra’s depiction of a Peregrine Falcon descending upon its prey. The obverse bears the familiar right-profile portrait of Queen Elizabeth II. This particular portrait is from Susanna Blunt in 2003.

Each coin available on Silver.com today has a PF69 grade, indicating a coin with full, original luster from the mint but also a maximum of two minor detracting flaws.

As an Early Release, these coins were received by the NGC within the first 30 days of the 2016 release date set by the Royal Canadian Mint for the coins.

If you have any questions about these popular coins, please contact Silver.com at 888-989-7223. You can also reach us online using our live chat and email features. If you are interested in similar products, be sure to check out our full selection of Canadian Silver Coins.