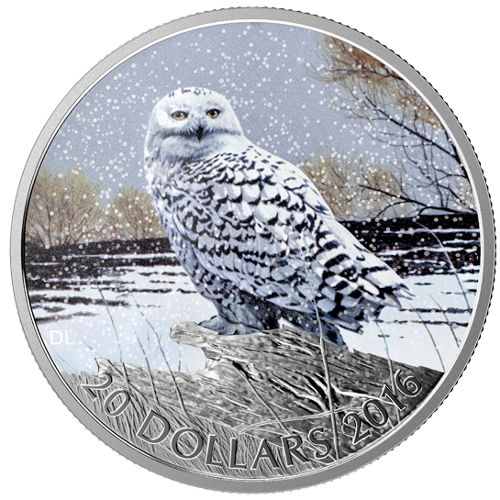 The latest stunning coin from the Royal Canadian Mint comes as part of the Iconic Canadian Animals coin series. Also known as Majestic Animal coins, these brilliant proofs feature colorization that makes them a must-have item for collectors. Right now, the 2016 1 oz Silver Canadian Snowy Owl Coin is available on Silver.com for purchase while supplies last.

The snowy owl is a powerful and silent predator who stalks its prey from above, swooping in for the kill without a sound. The creature is representative of Canada’s Arctic Circle region, and is among the largest owl species in the world.

Silver Snowy Owl coins from the Royal Canadian Mint are the ninth released in this Majestic Animal series of coins. Previous designs in the series highlighted other well-known species in the Canadian wilderness, such as the polar bear, moose, bighorn sheep, mule deer, and elk, among others.

On the reverse face of the 2016 1 oz Silver Canadian Snowy Owl coin is the colorized image of a snowy owl as created by Douglas Liard. Designer of all Majestic Animal series coins, Liard’s creation features a snowy owl as it rests upon a fallen log after the first snowfall of the year. Engravings on this side include Liard’s “DL” initials and “20 Dollars 2016.”

The obverse features the right-profile portrait of Queen Elizabeth II, as created by Susanna Blunt in 2003. Her Majesty’s effigy has not been colorized, and is accompanied by engravings that include her name, the nation of issue, and the phrase “D.G. Regina.”

If you have questions, please reach out to Silver.com associates at 888-989-7223. You can also connect with us online by using our website’s live chat service, or by submitting your questions to us via email. To see similar items, be sure to check out our collection of Silver Canadian Coins.