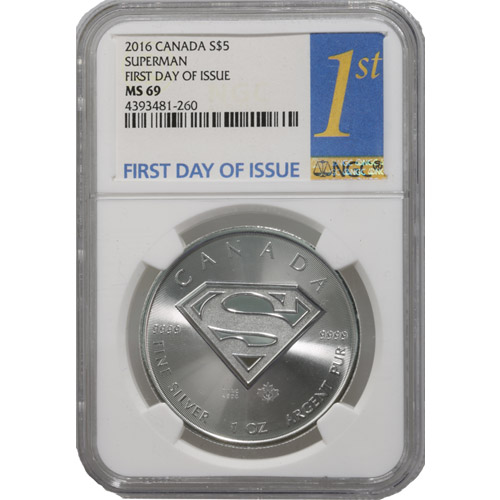 In 2016, the Royal Canadian Mint began to issue a number of comic-themed coins. While many mints around the world have focused comic-themed series around Marvel Comics, one of the Royal Canadian Mint’s major releases in 2016 was the Superman Shield coin. Now, near-perfect condition 2016 1 oz Silver Canadian Superman Shield Coins are available to you for purchase online at Silver.com.

The character known as Superman was created by the writer-artist team of Jerry Siegel and Joe Shuster, respectively. Superman has been a staple of the DC Comics universe for more than 80 years now and first appeared in Action Comics #1 published in April 1938. Superman got his start in comics, but the character has been adapted for use in radio serials, novels, feature films, and television shows of various names.

Superman was born on the planet Krypton with the name Kal-El. His parents sent him to Earth just before his home planet was destroyed by a cataclysm of natural origin. The ship carrying the young Kal-El landed near the fictional town of Smallville in the United States of America. He was raised by Jonathan and Martha Kent under the name Clark Kent.

The obverse of the 2016 1 oz Silver Canadian Superman Shield Coin features a bust of Queen Elizabeth II. Her Majesty is shown here in right-profile relief in an image design in 2003 by Susanna Blunt for the Royal Canadian Mint.

On the reverse face of 2016 Silver Canadian Superman Shield Coins, you will find the iconic diamond-shaped Superman shield logo. The diamond-shaped logo has a large “S” at its center and features prominently on Superman’s chest. You will also find the micro laser-engraved maple leaf security feature on this side with radial lines in the background field on both sides of the coin.

These 2016 1 oz Silver Canadian Superman Shield Coins are available housed inside of protective plastic slabs. The coins come with a near-perfect Mint State 69 certification. Coins in this condition showcase full, original mint luster with a maximum of two minor detracting flaws. Examples of those flaws are limited to minuscule contact marks or hairlines and must be located outside the primary focal points of the coin. First Day of Issue, or FDOI, labels are for coins received by the NGC within the first 24 hours of the initial release.

Silver.com customer service is here to assist you on the phone at 888-989-7223. Alternatively, we are available on the web using our live chat and email address features.