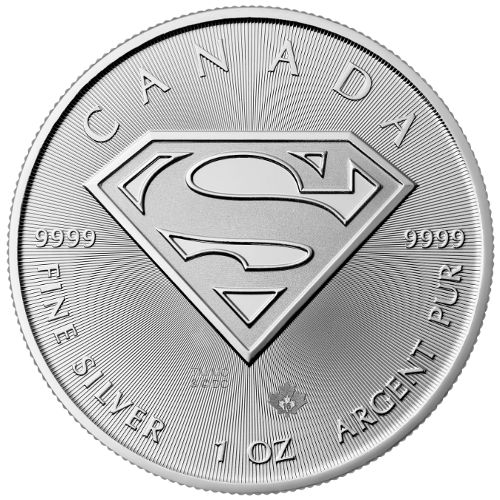 Any quantity available for $7.39 per oz over spot!

It’s hard to argue with the current popularity of Superman. The iconic DC Comics superhero was the first major superhero to captivate generations of children when he was unveiled to the world in June 1938. Today he remains in the minds of millions with the release of several feature films from Hollywood. The 2016 1 oz Silver Canadian Superman Shield Coin is currently available on Silver.com.

Superman was the creation of writer Jerry Siegel and artists Joe Schuster. The two were just high school students in Cleveland, Ohio when they developed the Man of Steel in 1933. It would be another five years before Superman appeared in major publication comics. He was sold to Detective Comics, which went on to become DC Comics in the future.

In the origin of Superman, his superpowers are explained by his birth on the planet Krypton. He was shipped away from his home planet by his birth parents just before it exploded. Throughout the stories of Superman’s life, he continually runs into his archenemy, the supervillain Lex Luthor.

On the reverse face of each 2016 1 oz Silver Canadian Superman Shield Coin you’ll find that memorable “S”, set within a pentagonal shield shape. Engravings on the coin include the nation of issue, year of issue, and the coin’s weight, purity, and metal content.

The obverse side of all 2016 1 oz Silver Canadian Superman Shield coins features the standard right-profile portrait of Queen Elizabeth II. Created in 2003 by Susanna Blunt, it features on the obverse of all Canadian coinage.

Founded in 1908, the Royal Canadian Mint was originally a Royal Mint of London enterprise used to refine gold and silver from the precious metal discoveries in the Yukon Territories. Today, it is the sovereign mint of Canada and includes facilities in Ottawa and Winnipeg.

If you have any questions, please don’t hesitate to ask. A Silver.com associate is available to help at 888-989-7223, online using our live web chat, or via our email address. Check out similar products on our Royal Canadian Mint Silver Coins page.