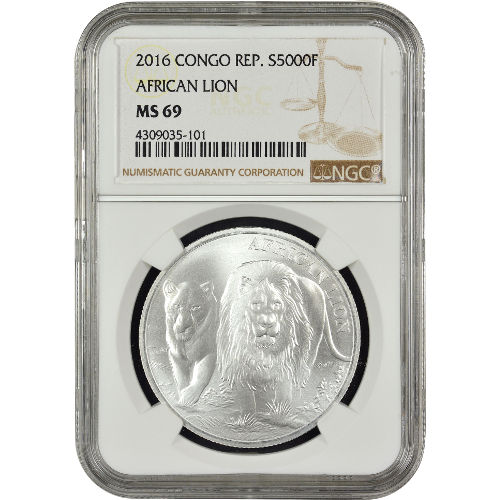 The Silver African Lion is one of the newer silver bullion coin programs from the African continent, and like those before it has undergone some significant changes after just one year. Designed to feature new designs on the obverse each year, few predicted a change in the nation of issue of just one year as well. Today, the 2016 1 oz Silver Congo African Lion coin is available on Silver.com.

Silver African Lion coins were originally released in 2015 as coins issued for the nation of Burundi. After just one year, the contract and nation of issue shifted to the Republic of Congo. Some of the design features remain similar, such as the use of a male-female lion pairing on the obverse and a coat of arms on the reverse, but specific features have changed.

On the obverse of this year’s coin you’ll find the pairing of a male and female lion from a pride as they seemingly stalk some prey in the distance. The duo are on foot, with the male leading the way even though females are often left to do the hunting for a pride. Replacing the text block in the middle of the design, “African Lion” is now engraved along the design’s outer edge.

The reverse features the coat of arms for the Republic of Congo, and the coins bear a similar face value of 5000 Francs that is considered legal tender only in the nation of Congo. The coin’s year of issue, weight, purity, and metal content are also included.

Sunshine Minting of Couer d’Alene, Idaho is responsible for the production of these coins. Just 50,000 coins were minted in total this year, making these rare among a small mintage release.

If you have questions, please don’t hesitate to ask. A Silver.com associates is available to help at 888-989-7223, online using our live chat, and via our email address. If you are interested in similar products, check out our full selection of Silver Congo Coins.