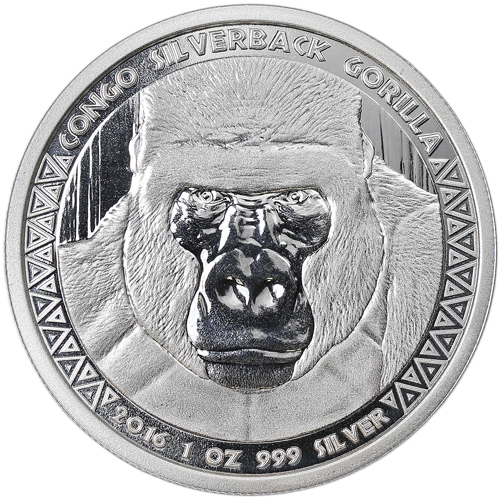 The second release of the Congo Silverback Gorilla coin series from the Scottsdale Mint is now available for purchase, and brings an all-new design to the popular new series. Commissioned in 2015, these brilliant coins celebrate one of the Congo’s most notable residents. Right now, the 2016 1 oz Silver Congo Silverback Gorilla Coin is available to purchase on Silver.com.

The 2016 1 oz Silver Congo Silverback Gorilla coin features a proof-like finish. Coins with a proof-like imagery have mirrored backgrounds with the slight presence of frosted elements on the coin’s design sets.

On the obverse of the Silver Congo Silverback Gorilla coin is the close-up image of a gorilla’s face. The haunting eyes and glaring image of the Gorilla are surrounded by the engravings of “Congo Silverback Gorilla” above the design and “2016 1 oz 999 Silver” below. The gorilla species live in tropical and subtropical forests in Africa, with the eastern lowland subspecies of gorillas occupying the Democratic Republic of Congo near its border with Rwanda.

If you have any questions, Silver.com customer service is waiting to help. You can contact us on the phone at 888-989-7223, online using our live web chat, and via our email address.