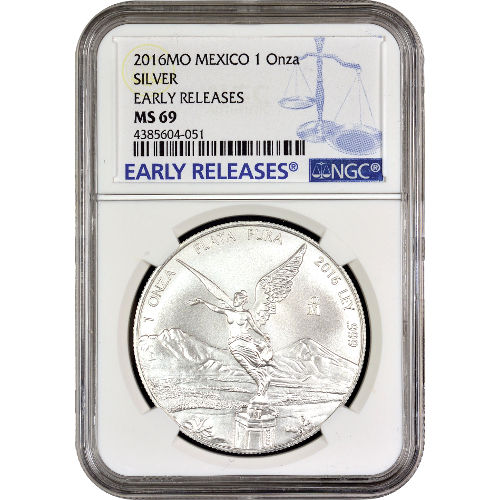 The Silver Mexican Libertad is the single most popular product from the Mexican Mint. Introduced in 1982, it features historic images that originally graced a Mexican coin for the first time in 1921. The 2016 1 oz Silver Mexican Libertad Coin is available today from Silver.com in near-perfect condition with a special designation.

Silver Mexican Libertad coins are unique in the bullion industry. While the coins do not have an official face value engraved upon them, they do have legal tender status in Mexico. The Banco de Mexico issued a floating face value, meaning the coin’s legal tender value fluctuates based upon market conditions and could change from one day to the next.

Winged Victory may have first appeared on the gold Centenario in 1921, but it dates back much further than that. The image originated during Mexico’s struggle for independence from Spain. Her image is representative of the nation’s success, with one hand holding the broken chains of slavery and the other lifting a wreath crown toward the sky as a symbol of free governance.

Each of the 2016 1 oz Silver Mexican Libertads available in this listing has a near-perfect MS69 grade from the NGC. Coins in this condition have full, original mint luster, but also feature a maximum of two minor detracting flaws on the surfaces.

As an Early Release coin, these products had to meet certain delivery standards. Most importantly, these coins had to arrive at the NGC depository within the first 30 days of the release date set by the Mexican Mint for its 2016 issue coins.

On the obverse is that famous image of Winged Victory, similar to the one on the statue of Victoria on the Mexican Independence Victory Column in Mexico City. The reverse features the modern coat of arms of Mexico, along with 10 historic interpretations of that same seal.

Please feel free to contact Silver.com with questions at 888-989-7223, chat with us live online, or email us with your questions.