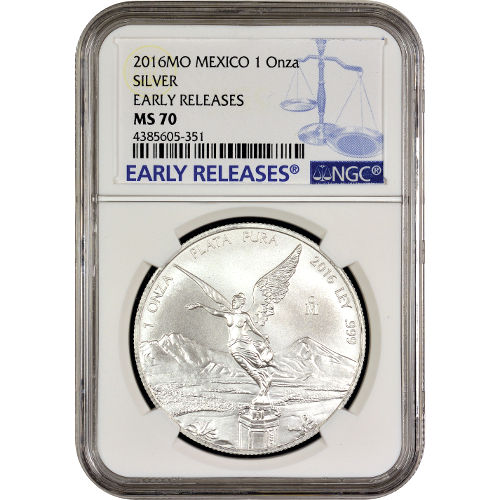 One of the most popular silver bullion products from the North American continent is the Silver Mexican Libertad. Often overshadowed by other coin programs from the Royal Canadian Mint and United States Mint, the Mexican Mint’s flagship series of silver coins has its fair share of admirers around the globe. Right now, the 2016 1 oz Silver Mexican Libertad is available for purchase on Silver.com.

Each of the 2016 1 oz Silver Mexican Libertad Coins in this Silver.com product listing earned a Mint State 70 grade from the NGC. Considered a perfect specimen, these coins have full, original mint luster and lack any detracting flaws on the surfaces.

The Early Release designation from the NGC is reserved for coins that arrive at its depository, or an approved third-party facility, within the first 30 days of release. The Mexican Mint sets its own release dates and is responsible for ensuring the coins arrive within the specified time period to earn the ER label.

On the obverse of each coin you’ll find a key symbol from Mexico’s fight for independence: Winged Victory. Her image stands in the center of Mexico City today atop the Victoria of Mexican Independence Victory Column, where it was erected beginning in 1921 to coincide with the centennial of independence and the release of the Centenario.

The reverse of the coin features the modern Mexican coat of arms, which features a bald eagle doing battle with a serpent. The image symbolizes Mexico’s fight to rid itself of Spanish colonial rule.

The Mexican Mint strikes the Silver Mexican Libertad for the federal government under the oversight of the Banco de Mexico. Founded in 1535, it is the Western Hemisphere’s oldest minting facility and once minted coins used throughout the Spanish Empire’s western colonies.