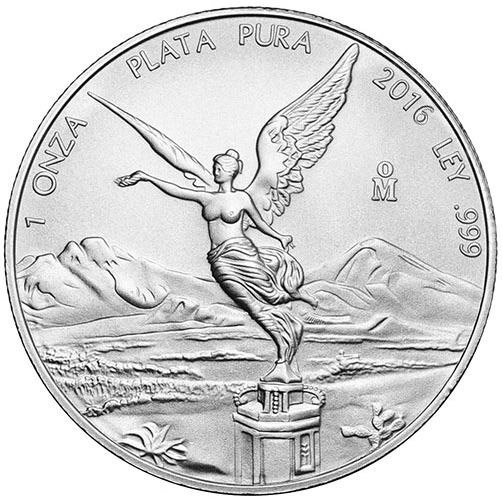 The Silver Mexican Libertad coin has grown to become one of the more popular coins in the world, and certainly across North America. Investors turn to this coin for its government-backed purity, as well as the value inherent in owning a coin with low mintage levels and limited availability. The 2016 1 oz Silver Mexican Libertad Coin is available today in BU condition on Silver.com.

The Mexican Mint used some of the nation’s most iconic images in the creation of its Silver Mexican Libertad coins in 1982. The first of these is the image of Winged Victory, also known as the Angle of Independence. Her figure was a reminder of the freedom Mexicans earned through victory in the War of Independence with Spain.

Winged Victory holds the broken chains of bondage in her left hand, as a symbol of the nation’s freedom from Spain. In her right hand, she holds up a wreath crown as a symbol of independent rule.

The other important image used on the coin is that of the nation’s coat of arms. In the design, a bald eagle is featured battling a serpent from its perch atop a cactus. This imagery is meant to represent the fighting spirit of Mexico in the fact of the serpent, indicative of Spain’s grip on the nation.

All of these 2016 1 oz Silver Mexican Libertad coins is in Brilliant Uncirculated conditions. Coins with a BU grade show no signs of wear and tear, but may feature minor detracting flaws such as breaks in the luster, spotted surfaces, or contact marks.

The image of Winged Victory appears on the obverse of the coin, along with the coin’s weight, purity, metal content, and year of issue. On the reverse you’ll find the coat of arms for the nation of Mexico.

If you have any questions, Silver.com associates are eager to help. You can reach one of our team members on the phone at 888-989-7223, connect with us online through our live chat service, or send us an email.