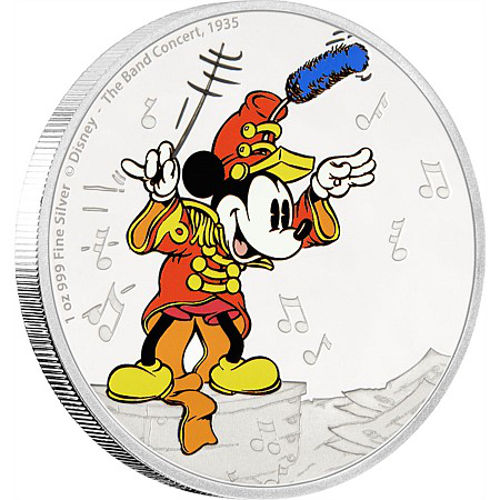 There is no Disney character with a greater global profile than Mickey Mouse. Walt Disney’s first major creation, Mickey has entertained audiences around the globe filled with children and adults alike since the 1920s. Today, the New Zealand Mint celebrates the changing looks of Mickey in the Mickey Through the Ages Series in its Disney Classics collection. Right now the 2016 1 oz Niue Silver Mickey Mouse The Band Concert Series Coin is available for purchase on Silver.com.

The Mickey Through the Ages Series of gold and silver coins from the New Zealand Mint looks at how Mickey has changed since his 1928 introduction to the world, including highlighting him in the various roles he’s been placed over the course of 10 decades of cartoon dominance.

In The Band Concert, Mickey plays the role of a bandleader struggling to conduct a small musical band through a production of the William Tell Overture. His band members, and Mickey himself, are distracted at every turn by an over-zealous Donald Duck.

The Band Concert was a seminal moment in the history of American animation, and that of the young Walt Disney. While Mickey debuted seven years earlier in Steamboat Willy, the 1935 release of The Band Concert was memorable because it was the first animated short ever created in color.

On the reverse of the 2016 1 oz Niue Silver Mickey Mouse The Band Concert Series coin is a colorized image of Mickey Mouse in his role as the bandleader, just as he appeared in the original film more than 80 years ago.

The obverse face of the coin includes the right-profile portrait of Queen Elizabeth II, created in 1998 by Ian Rank-Broadley. Her Majesty’s effigy is accompanied by engravings of her name, the year of issue, face value of the coin, and the nation of issue.

Located in Auckland, the New Zealand Mint is a private minting facility and the only one of its kind in New Zealand. It is not, however, associated with the national government. Official New Zealand dollars and coinage currency are produced for the government overseas at the Royal Canadian Mint and Royal Mint in London.

If you have questions, please don’t hesitate to reach out to Silver.com. Our associates are available on the phone at 888-989-7223, online using our live chat, and via our email address. If you are interested in similar products, be sure to check out our full selection of New Zealand Silver Coins.