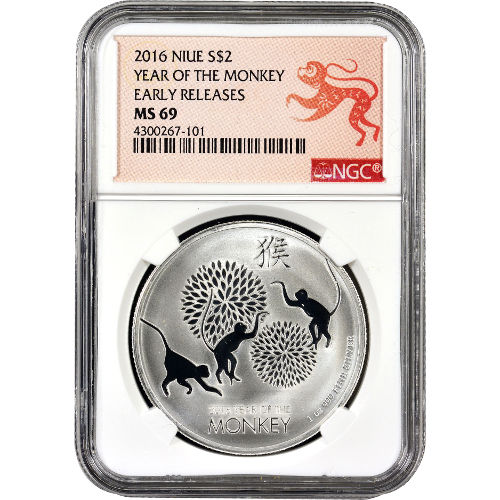 Lunar-themed precious metal coins and bars are unquestionably the most sought-after products in the industry at this moment. Mints around the globe produce lunar-themed bullion coins in silver and gold each year, and that includes the privately-owned New Zealand Mint. Right now, the 2016 1 oz Silver New Zealand Monkey Coin is available on Silver.com in near-perfect condition.

Each of the 2016 1 oz Silver New Zealand Monkey Coins in this product listing is considered a near-perfect specimen by the NGC. Coins with an MS69 grade have full, original mint lusters, but also feature a maximum of two minor detracting flaws. These flaws are often limited to miniscule hairlines or contact marks found outside the primary focal areas of the coin’s surface.

These coins each earned designation as an Early Release product from the NGC. In order to qualify, the coins must be packed and shipped to an NGC depository or approved facility within the first 30 days of the date of issue.

On the reverse face of the coin you’ll find the image of a monkey staring right back at you, with half of its face appearing to peek around the corner of the coin. The obverse features the right-profile portrait of Queen Elizabeth II, along with engravings identifying the nation of issue and face value of the coin.

The New Zealand Mint is a privately-owned facility operating in Auckland, and is not affiliated with the national government. New Zealand currency is minted overseas by the Royal Canadian Mint or Royal Mint in London.