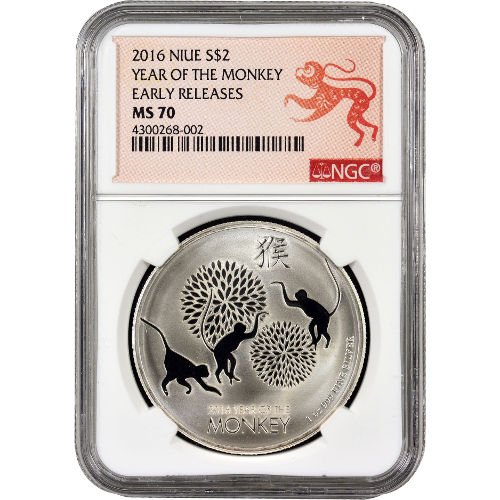 On the Chinese Lunar Calendar, 2016 is the Year of the Monkey. It’s time to celebrate those born under the sign who share characteristics such as intelligence and happiness, as well as a propensity for occasional trouble. The 2016 1 oz Silver New Zealand Monkey Coin is currently available on Silver.com in perfect condition from the Numismatic Guaranty Corporation.

The New Zealand Mint exists in the shadow of the Perth Mint, one of the finest facilities in the world. Nevertheless, it is home to some of the most spectacular coin designs in the world, including its own series of lunar-themed coins produced on an annual basis.

Right now on Silver.com you can purchase the 2016 1 oz. Silver New Zealand Monkey with a perfect MS70 grade from the NGC. Coins in this condition have full, original lusters and no detracting flaws such as blemishes, contact marks, hairlines, or other condition issues. As Early Release coins, the NGC certifies that these products were shipped to an NGC or NGC-approved warehouse within 30 days of the date of issue.

The reverse face of the coin includes the unique Year of the Monkey design for 2016. In addition to the monkey’s face, you’ll notice inscriptions such as “2016 Year of the Monkey,” “1 oz 999 Fine Silver,” and the words “Prosperity, Happiness, Intelligence.”

On the obverse is the image of Queen Elizabeth II. Created in 1998 by Ian Rank-Broadley, this right-profile effigy is accompanied by engravings that read “Elizabeth II,” “Niue,” “Two Dollars,” and “2016.”

The New Zealand Mint is not the sovereign mint of New Zealand. In fact, it is a privately-owned facility and is the only mint in the country, but produces most of its coinage for other nations in the South Pacific, such as the self-governing island of Niue.

We encourage Silver.com shoppers to contact us with any questions. You can call us at 888-989-7223, chat with us online, or email us with your questions.