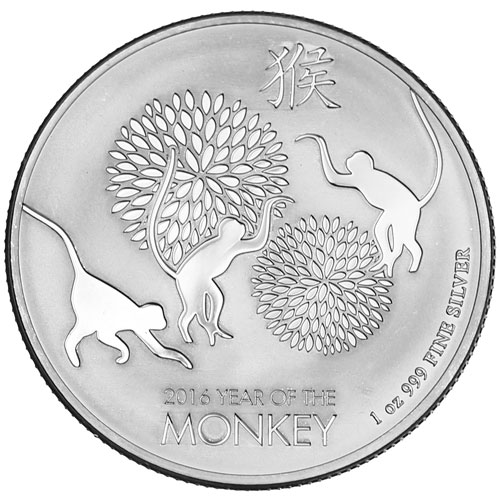 Everyone is getting in on the act in the 21st century, producing Lunar Series coins to attract the interest of both investors and collectors alike. The New Zealand Mint, a private facility in Auckland, has watched its neighboring Perth Mint in Australia dominate the market for lunar coins since 1996. Now, Silver.com offers the 2016 1 oz Silver New Zealand Lunar Monkey Coin in BU condition to investors.

The New Zealand Mint debuted its first Lunar Series coins in 2012 with the Year of the Dragon. As is the custom at other sovereign and private mints around the globe, the New Zealand Mint strikes new coins each year with a unique design on the reverse side reflective of the animal represented on the current Chinese Lunar Calendar.

In Chinese society, those born under the sign of a particular creature are said to share traits with the animal. For example, those born in the Year of the Monkey are considered energetic and fun-loving individuals whose zest for adventure and mayhem borders on egotistical, and could lead to harm in others.

On the obverse side of 2016 1 oz Silver New Zealand Monkey Coins is Queen Elizabeth II’s right-profile portrait. Created by artist Ian Rank-Broadley, Her Majesty’s effigy is surrounded by engravings that include her name, the nation of issue, the face value of the coin, and the year of issue.

The reverse bears the latest Lunar Series design from the New Zealand Mint. The all-new Year of the Monkey design in the middle is featured alongside engravings of the Chinese symbol for monkey, the phrase “2016 Year of the Monkey,” and the coin’s identifying characteristics.

The New Zealand Mint is a privately-owned company that operates in Auckland. All New Zealand Dollars and other currency are produced outside the country by either the Royal Canadian Mint or the Royal Mint of London.

If you have any questions, Silver.com associates would be happy to answer them. You can reach us on the phone at 888-989-7223, connect with us online through our website’s live chat, or send us an email with your questions. If you are interested in similar products, be sure to check out our full selection of Silver New Zealand Coins.