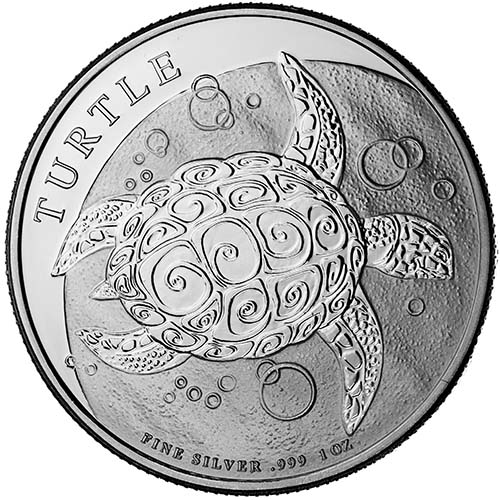 Any quantity available for $3.09 per oz over spot!

The preeminent coin from the New Zealand is back for 2016, bearing the same beautiful image on the reverse side that has made it a popular choice among investors and collectors around the globe. Representing the tiny Pacific nation of Niue, the 2016 1 oz Silver New Zealand Niue Hawksbill Turtle Coin is now available in BU condition on Silver.com.

The Silver New Zealand Hawksbill Turtle Coin was first introduced in 2010 as a bullion coin for the nation of Niue. The tiny Pacific nation is a self-governing state in free association with New Zealand. Located 1,500 miles northeast of New Zealand, the nation is home to just 1,190 residents.

Hawksbill turtles were chosen for this coin program because of the deep connection of the sea turtle species to the locals in the South Pacific. The hawksbill, known locally as the Taku, is one of two sea turtle species in the South Pacific. Spending most of its year near the shores of Fiji, the turtles traverse the waters between Fiji and New Zealand during mating season.

On the reverse side of each coin is the image of the Taku swimming through the warm, shallow waters of the Pacific Ocean. The design set on this side features a unique combination of frosted, matte finishing and a mirror-like finish. The turtle’s shell has elements of mirror-like finishing, while the water in the background is finished in matte. There is also a strip along the left of the coin that is mirrored and bears the engraving “Turtle.”

The obverse features the right-profile image of England’s Queen Elizabeth II. Designed by Ian Rank-Broadley, it is surrounded by engravings that include “Elizabeth II,” “Niue,” “Two Dollars,” and “2016.”

New Zealand Mint is actually a privately-owned mint located in Auckland. Though it produces coins such as the Silver New Zealand Hawksbill Turtle for other nations, New Zealand’s official currency is produced by Britain’s Royal Mint and the Royal Canadian Mint.

If you have questions, a Silver.com associate will be happy to answer them. You can reach us at 888-989-7223, connect with us through our live web chat, or send us an email. If you are looking for similar products, be sure to check out our full selection of Silver New Zealand Coins.