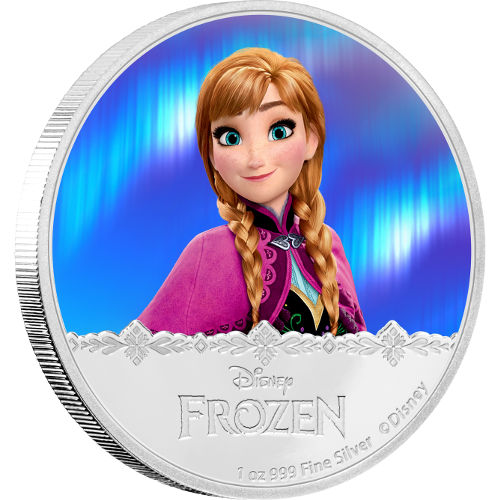 One of Disney’s biggest box-office hits in the 21st century was the animated princess film Frozen. Set in Scandinavia, the film followed the adventures from youth to adulthood of a pair of sisters, one of whom was hiding a secret power from the other that was eventually exposed in adulthood. Today, Silver.com offers the 2016 1 oz Silver Niue Disney Princess Anna Coin for purchase in a brilliant collector’s box with Certificate of Authenticity.

The New Zealand Mint produces a variety of Disney-themed coins for purchase by collectors. While this series initially focuses on two of the newest princesses in the Disney lineup, the Disney Frozen Series is its own separate entity.

Frozen Series coins launched in mid-2016 with the Queen Elsa coin, and continue with the 2016 1 oz Silver Niue Disney Princess Anna Coin. In the film Frozen, Anna is the younger sister to Queen Elsa. Though close in their childhood, the two sisters grew up apart from one another as their parents tried to hide Elsa’s secret powers which almost cost Anna her life at a young age.

Each coin in the Disney Frozen Series features a brilliant combination of frosted silver finish on the reverse, and a colorized field that brings the characters represented to life in the design. The Frozen Series will feature a total of five coins, with three to follow the release of the Queen Elsa and 2016 1 oz Silver Niue Disney Princess Anna coins.

On the reverse face of this coin you’ll find the colorized image of Princess Anna. The top half of the coin’s background features brilliant, real-life colors that bring the Northern Lights to life in the design. The lower half of the coin’s reverse field features a frosted, silver finish.

The obverse side of the coin bears the image of Queen Elizabeth II. Captured in right-profile relief, this 1998 creation from Ian Rank-Broadley represents the fourth-generation image of Her Majesty used on commonwealth coinage.

New Zealand Mint is a private minting facility located in Auckland, New Zealand. Despite the sovereign appearance of its name, the facility is not associated with the national government in any way and does not strike official New Zealand dollars and coinage for the nation. This responsibility is handled by the Royal Canadian Mint and the Royal Mint in London.

If you have questions, please reach out to Silver.com at 888-989-7223. You can also connect with us online through our live web chat or email address. To see similar products, check out our full selection of New Zealand Silver Coins.