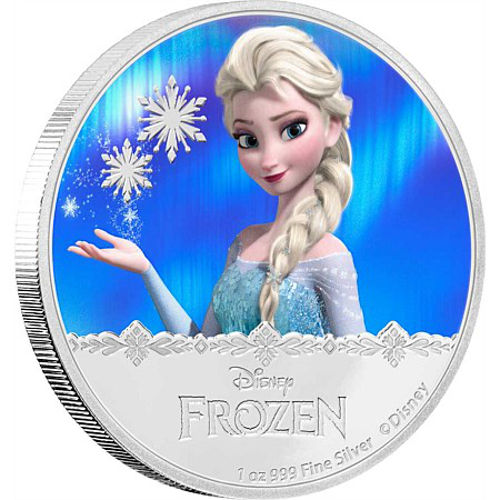 The planned series of New Zealand Mint silver coins will eventually feature a total of five collectible coins, and though no confirmation is available, a Princess Anna coin is likely to be the next design released. Each coin in the series will include colorized designs on the reverse.

On the obverse of the 2016 1 oz Silver Niue Disney Princess Elsa coin is the image of Queen Elizabeth II. This is the right-profile portrait of Her Majesty created in 1998 by Ian Rank-Broadley, and it serves as the fourth-generation depiction of the Queen since her coronation in 1952.

The reverse of each Princess Elsa coin captures the beautiful hues and colors of the Northern Lights in the background as Princess Elsa stands in the foreground. The top-half of the design features colorized touches to Elsa’s image, while the lower half is finished in silver and features “Disney’s Frozen” as an engraving.

The New Zealand Mint is located in Auckland and is the only minting operation in the country. Official currency for the government of New Zealand is produced by the Royal Canadian Mint and Royal Mint in London.

If you have any questions, please don’t hesitate to reach out to Silver.com. Our associates are available on the phone at 888-989-7223, online using our live web chat, and via our email address.