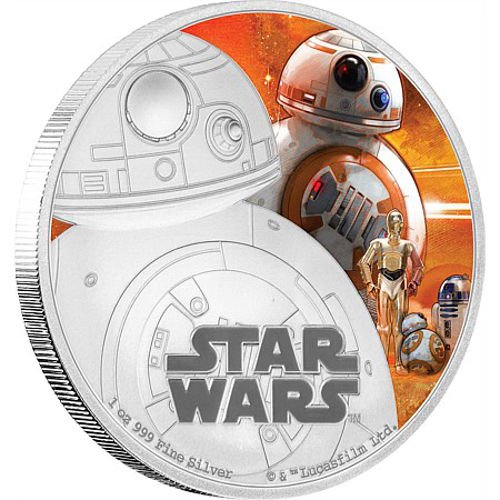 The Force Awakens unleashed the Star Wars universe on a brand-new generation of Americans, as well as millions more around the globe. A franchise that started in the 1970s now stretches across five decades of pop culture, and with a new trilogy underway, countless more will fall under its spell. Today, the 2016 1 oz Silver Niue Star Wars BB-8 Coin is available for purchase online at Silver.com.

If there’s been one constant in the Star Wars franchise, it has been the presence of lovable droids that don’t speak intelligible English. Lack of communication skills aside, fans of the franchise love these droids and they often play critical roles in the outcome of the storyline for the cast of characters.

The reverse of the 2016 1 oz Silver Niue Star Wars BB-8 Coin feautres three different images of BB-8. In the largest of these images you’ll see a silver depiction of BB-8 from up close, while the remaining two pictures are colorized images from the feature film.

On the obverse of all 2016 Silver Niue Star Wars Coins you’ll find an effigy of Queen Elizabeth II. Captured in right-profile relief, this depiction is from 1998 and was created by Ian Rank-Broadley for use on British and commonwealth coins.

BB-8 is the fourth coin release of the Star Wars: Force Awakens Series. This series is one of two from the New Zealand Mint, and celebrates the cast of characters from the first film in the new trilogy of Star Wars films. Each one is a 1 oz coin with .999 pure silver and colorized reverse images.

Your 2016 1 oz Silver Niue Star Wars BB-8 coin ships inside of a black, Star Wars-themed commemorative box that is shipped inside of a BB-8 shipper with full-color artwork. Each individual coin comes with a numbered Certificate of Authenticity.

New Zealand Mint is a private minting facility in the city of Auckland, New Zealand. Though it is the only mint in the country, it has no affiliation with the federal government, which has its coins produced by the Royal Canadian Mint and Royal Mint.

Please don’t hesitate to reach out to Silver.com. You can contact our customer service team at 888-989-7223, connect with us online through our live chat, or email us directly.