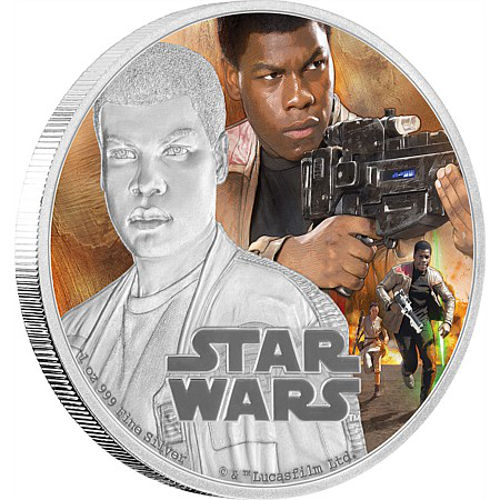 The New Zealand Mint is a leader in colorized, character-themed silver coins. Among its most popular products in this genre at the moment are its Star Wars: The Force Awakens coins. Featuring new releases representing characters from the new film, these products are a must-have for collectors. The 2016 1 oz Silver Niue Star Wars Finn Coin is available today on Silver.com.

December 2015 saw the renewal of a global love affair with the Star Wars universe. George Lucas’ popular creation first appeared in the 1970s with the original trilogy, and took us back in the storyline in the early 2000s with a prequel trilogy.

Now, a new generation of Star Wars fans can fall in love the franchise all over again as it takes viewers into the future to see a life after the original Star Wars films. A host of new characters are introduced, including a Storm Trooper turned Rebel Alliance member, Finn.

On the reverse side of the 2016 1 oz Silver Niue Star Wars Finn Coin you’ll find three portraits of Finn from the feature film Star Wars: The Force Awakens. Finn was formerly a Storm Trooper, but a battle on Jakku early in the film left him jaded as he did what he could to defect from the First Order.

Two of the images of Finn in the feature film are depicted on this side of the coin with brilliant, full-color illustrations. A third portrait comes right from the film and maintains a beautiful silver finish.

On the obverse of the 2016 1 oz Silver Niue Star Wars Finn Coin you’ll notice the right-profile portrait of Queen Elizabeth II. Her Majesty’s image on these coins is the 1998 depiction created by Ian Rank-Broadley.

The New Zealand Mint is headquartered in Auckland, and is the only minting facility in the country. A private company, it is not affiliated with the federal government and does not produce any New Zealand dollars or other official currency.

We encourage Silver.com customers to contact us at 888-989-7223 with any questions, or reach out to us online using our live chat and email features.