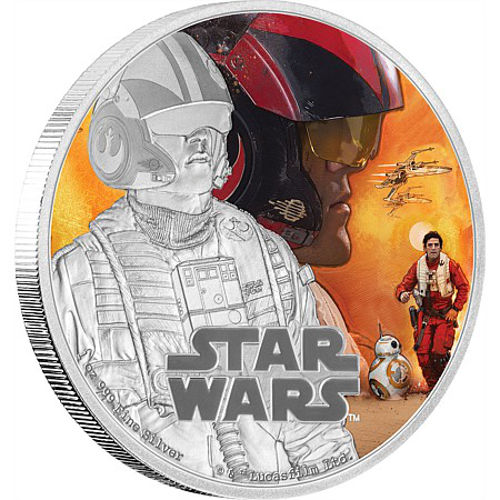 If you’re a fan of Star Wars and precious metal coins, now’s a great time to be alive. The New Zealand Mint has two separate Star Wars-themed coin series in production at the moment, and the silver colorized coins are proving immensely popular with collectors. Right now, the 2016 1 oz Silver Niue Star Wars Poe Dameron Coin is available online at Silver.com.

The Star Wars: Force Awakens coin series features 1 oz silver, colorized coins that feature a common design motif on the reverse of all products. Each coin represents a different, new character from the feature film with three images on the reverse side. One is in silver, and two are full-color pieces from the film.

On the reverse of the 2016 1 oz Silver Niue Star Wars Poe Dameron Coin you’ll find the silver image of Dameron wearing his X-Wing fighter pilot suit, complete with helmet on. The two colorized images include a right-profile portrait of him with helmet on, and an action shot from the film of him running in his suit with BB-8 close behind.

The obverse of all Silver Niue Star Wars coins features the right-profile portrait of Queen Elizabeth II. Created in 1998 by Ian Rank-Broadley, this image is the fourth-generation depiction of the Queen since she ascended to the throne in 1952.

Each of these 2016 1 oz Silver Niue Star Wars Poe Dameron Coins ships to you in a commemorative case to both protect the coin and make for easy display. The boxes are Star Wars-themed, and ship inside of a Poe Dameron-themed shipper. A numbered Certificate of Authenticity is included with each coin.

New Zealand Mint is a private minting facility located in Auckland, and is the only mint in the country. Despite that status, it is not affiliated with the federal government. All New Zealand currency is produced overseas by the Royal Canadian Mint and the Royal Mint in London.

If you have questions, please feel free to reach out to Silver.com at 888-989-7223. You can alternatively connect with us online through our live web chat or email features.