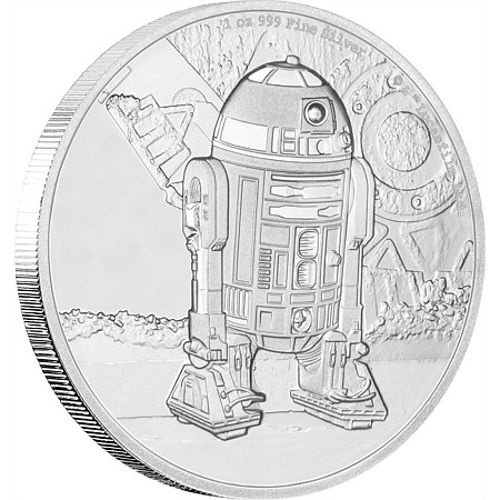 The Star Wars feature films aren’t known for necessarily producing lovable characters, unless you find the innocence and feisty nature of a short droid to be lovable. R2D2 is arguably among the most memorable characters from a film franchise that has spanned 5 decades now and will eventually total 9 major motion pictures. Right now, the 2016 1 oz Silver Niue Star Wars R2D2 Coin is available on Silver.com with special packaging and COA available.

The Star Wars franchise launched in 1977 with the release of Star Wars: A New Hope. That film introduced millions to a cast of characters that included two droids, mechanical robots that assisted in the life of humans throughout the galaxy.

Among the many droids featured throughout the films, R2-D2 and his human-like companion C-3PO were the major droids that fans came to know by name. While C-3PO had command of various languages and conversed with humans in English, R2-D2 communicated solely through a series of beeps and squeaks.

On the reverse of all 2016 1 oz Silver Niue Star Wars R2D2 Coins is the image of Artoo when he first appears in the films. Luke Skywalker and his uncle Owen Lars purchase the droid, seen to have little value at the time, from a group of Jawas.

The obverse of all the coins includes the familiar right-profile portrait of Queen Elizabeth II. Captured in 1998 by Ian Rank-Broadley, it represents the fourth-generation image of Her Majesty since her 1952 coronation. Engravings include “Elizabeth II,” “Niue,” “Two Dollars,” and “2016.”

New Zealand Mint is located in Auckland, New Zealand and is the only private minting facility in the country. Despite its status, it does not have a part in the production of New Zealand dollars and other circulation currency. This job is handled by the Royal Canadian Mint and Royal Mint.

If you have any questions, please don’t hesitate to reach out to Silver.com. Our associates are available at 888-989-7223, online using our live web chat, and via our email address.