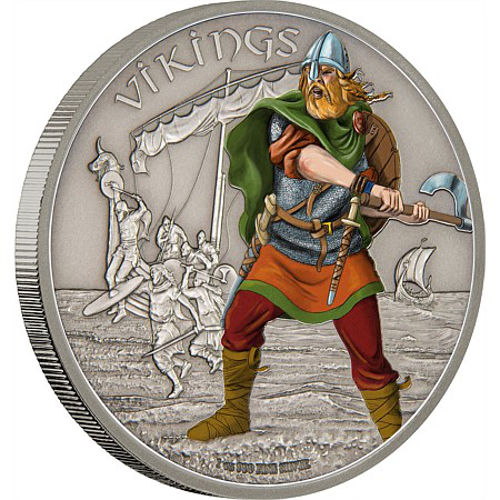 Few residents of the European continent would argue with the fact that the Vikings were among the most feared warriors in the history of mankind. These skilled fighters of Norse descent descended upon the continent for hundreds of years, sowing fear and wreaking havoc in many different kingdoms of their day. Right now, the 2016 1 oz Silver Niue Warriors of History Vikings Coin is available on Silver.com.

The Vikings went down in history as one of the most feared conquerors of the human world, but also one of the most skilled group of explorers and traders. While the Vikings descended upon modern-day France, Germany, Netherlands, and the British Isles with a thirst for blood, there was more to this group than warfare.

It is the Vikings, expert sailors, who discovered Greenland and were even rumored to have traveled as far as the inland stretches of the Hudson Bay in North America. Viking traders are also said to have traded their goods as far away from the Norse lands as Baghdad in modern Iraq.

Each of these 2016 1 oz Silver Niue Warriors of History Viking Coins is a proof specimen with colorized designs on the reverse, and an antique finish. Antiquing is a chemical treatment process that adds the appearance of age and a warm patina to the appearance of the coin. Each one ships in a themed rectangular box with Viking artwork and a numbered Certificate of Authenticity.

On the obverse of all 2016 Warriors of History Viking Coins is the image of Queen Elizabeth II, ruling monarch of England. Created in 1998 by Ian Rank-Broadley, this depiction captures the Queen in a fourth-generation portrait.

The reverse side of 2016 1 oz Silver Niue Warriors of History Viking Coins features the image of a large, broad-shouldered Viking warrior in the foreground. He is captured in full-color artwork, with silver artistry in the background depicting more Viking warriors coming ashore from their famed longboats.

If you have any questions about the Warriors of History Series or these Viking Coins, please don’t hesitate to contact Silver.com at 888-989-7223. We’re also available online using our live chat and email features.