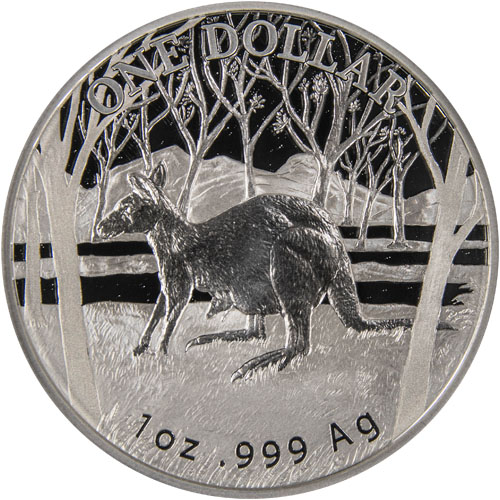 Over the years, the Australian Perth Mint has released many different coin series. 2016 marks the first year that the Perth Mint has introduced the Kangaroo Seasons Change series. In the years following 2016, each season is represented in this series and shows the baby joey kangaroo growing and changing. Today, you can purchase the first coin in this series, the 2016 Australian Silver Kangaroo Seasons Change Coin, online in a box from Silver.com.

With a limited mintage of 10,000 coins, the 2016 Australian Silver Kangaroo Seasons Change Coin is the first to appear in this series and is available to coin collectors everywhere. This coin was struck with one ounce of 99.9% fine silver and was issued with a face value of $1 AUD backed by the Australian government. The Kangaroo Seasons Change Coin series is bound to be popular among collectors because of its beautiful designs created by the Perth Mint.

The Australian Silver Kangaroo Seasons Change series shows the growth and development of the joey kangaroo. Since 2016 is the first year for this coin series, the joey is shown as a baby inside its mother’s pouch. The Royal Australian Mint first started releasing the Kangaroo Coin series in 1993, and many coins have been featured in fixed runs like the 2016 coin in the Seasons Change run.

On the obverse of the 2016 Australian Silver Kangaroo Seasons Change Coin, Queen Elizabeth II is pictured. Her renowned profile portrait was designed by Ian Rank-Broadley and is featured on many coins from the Perth Mint. Queen Elizabeth II’s imagery on the coin works to honor her as a revered leader of Australia. The obverse of the 2016 coin also shows the coin’s year of issue.

On the reverse of the 2016 Australian Silver Kangaroo Seasons Change Coin, a mother kangaroo is seen with her baby joey in her pouch. This coin series works to highlight the beauty of the kangaroo as an iconic animal of Australia. Both mother and baby kangaroo are shown in the beautiful Australian landscape, honoring the place that kangaroos live. The coin’s reverse also lists its weight, purity, and face value.

If you would like to learn more information about this silver for sale, Silver.com is here to help. Contact us today via email or online chat or call us at 888-989-7223.