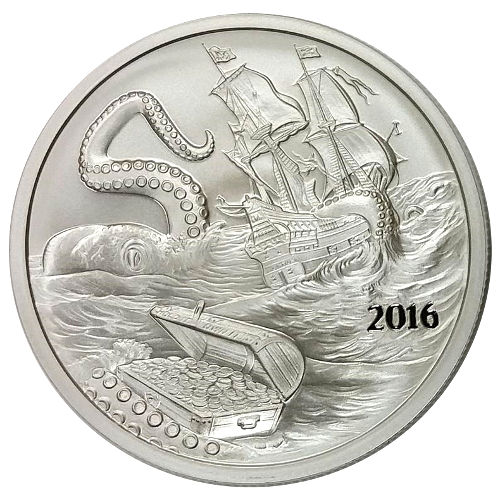 The Silverbug community on Reddit has inspired some of the most beautiful silver round designs. Between members of the community and numismatists at large, the silver rounds designed and produced for the Silverbugs don’t last long. Now is your chance to purchase the latest silver round from this collection as the 2016 1 oz Silverbug Kraken Round is here on Silver.com.

Silverbug rounds originated in late 2014 with a series of three different designs honoring the Silverbug’s fairy emblem. In late 2015, a new series of silver rounds was unveiled with the Welcome to Silverbug Island series.

These 2016 1 oz Silverbug Kraken Rounds are the second release in that new series, which is planned to include a total of eight silver rounds. This design honors the mythical kraken, believed to prowl the depths of the oceans and prey on unsuspecting sailors with ruthless efficiency.

Fabled in ancient tales, written records of the kraken emanated from Viking culture in the 13th century. Fearsome sailors and warriors, the Vikings weren’t without weaknesses, as the kraken that was believed to stalk the waters between Norway and Greenland struck fear in the hearts of many Viking sailors.

On the obverse is the image of a kraken as it attacks a galleon. The beast’s tentacles can be seen enveloping the whole of the ship, while one stretches for an open treasure chest in the foreground. The only engraving on this face is the year of issue.

The reverse features the common design theme planned for all eight silver rounds. A pirate galleon is featured stuck against an island of silver coins, with engravings identifying the silver round series and the weight, purity, and metal content of the round.

All Silverbug rounds are produced by the North American Mint. Founded by William J. LaMere Sr. in 1986, it remains a family-owned company today in the charge of his three sons. The mint’s facility is located in Rochester, New York.

Please direct your questions to a Silver.com associate. You can reach us on the phone at 888-989-7223, chat with us online using our live web chat feature, or email us.